Voice MagReviewsJordan Gray: Is It a…

A must-see this fringe

Jordan Gray is a force of personality. Trans comedian meets superhero extravaganza, Is It a Bird is an exceptional show that combines traditional stand-up with acerbic Tim Minchin-style musical comedy. Side-splittingly sharp lyrics and even sharper punchlines, this late night comedy is a tour de force of laughter and insight that rewrites the standard of solo comedy.

DC fan forums delving into Batman’s prowess in the Justice League have nothing on Gray’s send-up of the internet’s favourite sad boy billionaire and caped crusader. No one has trouble with Bruce Wayne self-identifying has a bat yet puzzle and outrage follow Gray when she identifies as a woman. The set-ups come thick and fast from here. The premise of the show, of switching identities like Superman in the nearest phone box, is excellent joke fodder; and it gives audiences a handy analogy to lean against as Gray dispatches misconceptions around trans people, like a vigilante hero whose superpower reduces unsuspecting crims to snorts and giggles.

There is actually a red phone box that stands at the corner of the stage. It goes mostly unnoticed throughout, until the end of the show when Gray bares all in a risk-taking finale that caps off an incredible performance with a moment of vulnerability and self-assertion. The comedy is non-stop. It lingers even when Gray dares to prise the lid on her brazen, egotistical stage persona that gives the show its edge. Of course, we realise that this feeling of pathos was there all along. Better to be running the joke than the butt of it, says Gray. It’s a momentary blip, a peek behind the mask. The thought had never crossed our mind until she put it out there.

Is It a Bird is fresh, hilarious, exposing - a late night romp with a diva heart. Gray is a rare talent. It’s a must-see this year at the fringe. 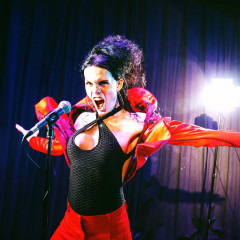 Jordan Gray: Is It a Bird?

A must-see this fringe