Puppet Pansori Sugungga is to Korean fables what ASMR is to sleep-deprived YouTubers at 4am after binge-watching videos of cats jumping into little cardboard boxes.

A soothing combination of Korean puppetry set to cello, Puppet Pansori brings to life a version of the hare and the tortoise fable. In this version, we’re introduced to two animals from different walks of life: the turtle (an amphibian) and the rabbit (a landlubber). The turtle, expertly puppeteered by Eunsil Noh, is a prevaricating deceiver with the demeanour of an old codger. He’s been tasked with retrieving the liver of a rabbit to cure the Lord of the Sea of his tempestuous nature. The subterfuge unfolds with a wicked sense of humour and political intrigue.

Interspersed with song and object work, Eunsil translates the story from the Korean pansori epic chant - a narrative song that originate in seventeenth-century Korea - giving the us rhythm and poetry of the original language alongside the translation in real-time. The wooden puppets rattle, clank, shake and clatter as our characters plonk about the stage (a travelling suitcase of tricks with puppet hooks and lush rotating sets). When the rabbit discovers he’s on the chopping block, his little wooden body quakes and clacks with fear. The animals are beautiful made and the whole show is not only incredibly charming but a relief from the chaos of the rest of the festival.

The cello sound-tracking the performance lifts the drama, sweeping us from the skies into the depths of the sea. I was mesmerised by Eunsil. Some of her puppetry felt uncannily organic, like watching flower heads carried along by the ripples in a pond or jellyfish undulating in the sea. The whole experience is captivating. It captures that happy childishness and wonder of listening to fables; and the show would be good, clean family fun, if there wasn’t a little bit of swearing.

Puppet Pansori’s story is, among other things, about prejudice and the foreignness of realms. The separate kingdoms of land and sea never truly meet, though their borders are crossed several time. Ultimately, their elements are unknown to one another and their natures in constant flux. The inhabitants misconstrue and deceive to get what they want. They bicker and promise what they cannot deliver. It’s witty, gently entertaining and a joy to hear a traditional storytelling well told. 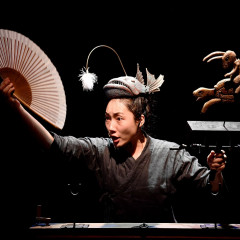