Exploring copper mining through the form of physical theatre, dance and techno music.

The show began with a strange atmosphere. Technical difficulties and an error message blaring behind the actors. I almost wasn’t sure if the show had actually begun. But before long, a silent physical performer began experimenting with moving rocks around the stage, generating different sounds, created live by a musician on stage.

Through the performance, rocks are smashed with ‘Neolithic’ tools and arranged by the performer. The rocks are treated like modern technology, with a helpful voice presenting troubleshooting advice. At moments, the whole scene becomes a cacophony of blaring music, violent rock-smashing and words flashing on the screen. And at other moments, there was a tense, meditative sort of ringing as concentric circles were formed on stage.

The music was incredibly engaging, becoming a sort of a radio that picked up snatches of sound from the Flintstones to opera. I couldn’t stop watching sound artists rapidly create soundscapes out of nothing.

To be honest, I’m not quite sure that I ‘got’ everything this show was trying to say. But I could feel the power of the message that company MECHANIMAL was trying to express. The links between ancient times, technology, and copper mining were definitely to think over and I certainly won’t be forgetting this show – it’s unlike anything I’ve ever seen before. 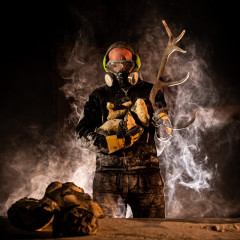 Exploring copper mining through the form of physical theatre, dance and techno music.