Garrett Millerick plays it safe, which is to his detriment.

Garrett Millerick got gout during lockdown. Other than that though, he loved it, drinking beer and watching YouTube like the best of us. Now, back on the stage after two years, I fear the time has dulled his comedic senses. Over the course of an hour Garrett generally reached for the low hanging fruit of comedy: Greta Thunberg, spam emails, Amazon, Guardian readers, and an extended bit on how shit Twitter is. Hardly breaking new ground.

Although lacking originality (indeed, I’m sure some of the Amazon material was in his 2016 show), the set still elicited laughs – and some were proper belly laughs. There were moments where the old Garrett came through – angry, barbed, and prepared to say what most only silently stew over. It was those moments that really underlined how otherwise mundane the set was. Here’s hoping this is just a post-pandemic jitter. 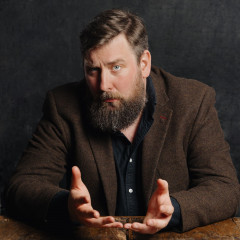 Garrett Millerick plays it safe, which is to his detriment.