Fixed celebrates the cringe factor of growing up as a zillenial, and it’s a big yes from me

As soon as Emily Wilson walked up to her keyboard and did a quick vocal warmup pulled from Hannah Montana transition music – I knew, at that moment, that this show was going to take us all on a journey. In a way, Wilson is a bit like a non-fiction Hannah Montana. The rising comedy star Wilson reveals her popstar past by turning to absolute bops of songs and painstakingly funny diary entries.

She opens her debut show Fixed with a hard humiliating truth, the fact that she was once a cringe teenager. A cringe teenager, like many in the world, who grew up with technology and the inherent need to record everything about their life like it is some self-produced Truman Show.

Wilson reveals that as a teenager she reached minor success on YouTube in a singing duo with her unrequited love and gay bestie Austen. Their band name was the very clever portmanteau ‘Ausem’ (difficult not to laugh at). Fixed is Wilson telling her truth – a truth so hilarious it’s surprising that it’s 100% real (even though there are literal video receipts projected onto the walls of Pleasance Beneath).

Ever since Emily Wilson was a toddler, she wanted to become famous. A want so big, that it manifested itself onto a US X Factor audition stage in 2015. However, the fame she experienced was not the one she imagined – instead of glitzy success, she was faced with soul-sinking feedback from Justin Bieber’s music producer, Paula Abdul and Nicole Scherzinger.

At each stage of the story the absurdism ramps up, and so do the laughs. Fixed is priceless storytelling that keeps you enraptured in its content. Wilson takes us on a whirlwind journey of Emily’s horror of Ausem nearly being forced apart by a celebrity judging panel, Austen’s indifference to being split up, their rejection at boot camp, and then both of them being put into a 10-person supergroup band called ‘Intensity’ (which is really the cherry on top).

Wilson’s musings on Intensity are absolutely fascinating. In what was manufactured to be the next One Direction came the nightmare fuel of 10 pre-teens and teenagers singing at the same time. Think Glee and Kidzbopp, but even more cursed. You couldn’t make it up.

I’ve never seen a show quite like Wilson’s, a mix of original songs, stand-up and edited footage – the balance is pitch perfect, and keeps you on your toes. Wilson uses her American political sensibilities to draw comparisons between the UK and US political landscapes. Her wittiest one-liners also end up being peppered into her songs like the fact that Intensity was a 10-piece group “with two twelve-year-olds”. Then there’s her vivacious performance, she parades across the stage like she’s sold-out arenas. The stage is her home, she has the natural confidence of someone that has done stand-up for decades.

This show is entirely original, it’s a page (probably quite painfully) ripped straight from Emily Wilson’s well-hidden diary. Wilson is unflinchingly honest, but that’s what makes her so refreshing – it is Wilson telling this story that makes it a page-turner, she reclaims back her narrative from the producer’s final cut and puts her stamp on it (one far more memorable than a melodramatic rendition of Christina Perries ‘Jar of Hearts’ ever would be).

Packed full of side-splitting references from Ablisa to Mitt Romney, this show has the same appeal as watching a well-written musical with catchy songs – you can’t help but want to go again, and again. Wilson is one to watch out for, and this is your cue to get a ticket for this must-see show. A well-deserved standing ovation for a future star, and I’d like to personally request an album of all the songs in Fixed, please.

Emily, you weren’t great… You were excellent. Screw boot camp, you’re heading for the stars. 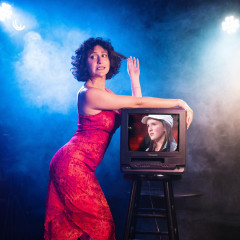 Fixed celebrates the cringe factor of growing up as a zillenial, and it’s a big yes from me