Taking to the stage of the Underbelly’s Dairy Room with nothing more than a chair and a microphone, Emmanuel delivered a very intimate performance of his sell out show, Emancipation.

Covering everything from his days as a nightclub bouncer, poking old people on a cruise ship in hopes that they’re dead so he can get free ice cream, to hating his kids, the Live at the Apollo comedian had us in hysteric – even the 16-year-old he shamed and embarrassed the moment he sat down.

Emmanuel has the energy of that guy you meet on a night out and spend hours talking to because he’s just so interesting. Toeing the line between comedian and wise old uncle – and by old I mean figuratively not literally – an hour in his company felt like 10 mins. I could listen to Emmanuel do stand up all day because whether he offends you or not, he’s speaking straight up facts, which simply makes him all the funnier.

Why the show is called Emancipation I’m actually not sure, but you can catch it everyday at 18:10 at the Underbelly Dairy Room. 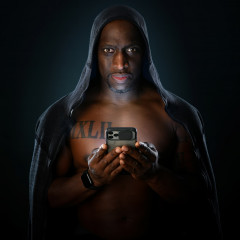