We speak to comedian Emmanuel Sonubi about his Edinburgh Fringe debut, and whether cancel culture has a place in the social narrative.

Hello to you all. My name is Emmanuel Sonubi, stand-up comedian from North London.

I would describe my show as ‘Extremely Honest’. The part I have most enjoyed is that I’ve not had to make anything up, everything that I talk about in the show has happened or is still happening now. There’s parts of the show that I simply vented into my notebook and was an honest feeling that I have left untouched. It’s a lot of fun and I get to talk about a lot of things that people don’t know about me.

It’s been on my list of things to do since I started comedy. My plan is to tour this show later towards 2023 so I have to get it ready for the road and whatever lies ahead. It’s going to be a challenge as I don’t think I have ever performed as much in a single month as I’m about to.

For me I think it’s the prestige. It’s the biggest one and globally known. It’s definitely the biggest in the UK. I’m still very new to the game so with this year being my first at the Fringe, maybe I will truly see what differentiates it from the rest.

I’ve always loved stand-up comedy and I’ve always been a joker. I’ve always enjoyed making people laugh. I grew up watching Eddie Murphy, Chris Rock, Richard Prior, Dave Chappelle but never actually thought to be a comic myself until I went to see a friend do an open mic night. After she came off, she introduced me to the organisers and told them about my sense of humour. Long story short, they convinced me to sign up for an open mic night so I did. I spent the next week in constant fear over what was going to happen but thought ‘I’d said I’d do it so I’ve got to go do it now’. From the first bit of laughter I was hooked and have not looked back.

My training was ‘Musical Theatre’ and that is what I did for many years, that and teaching dance. Being on stage was nothing new to me. I always knew how to deliver a ‘show’. The hard part was the content, who do I want to be on stage? Then it came to me. Outside Musical Theatre my other job was ‘Nightclub Bouncer’ which again is great training for comedy and gave me a certain presence on stage. That’s when I realised to use all of this and just be myself.

Probably be still working IT Networking Security & Data Compliance, which is what I was doing before I quit to follow stand-up.

It hasn’t changed how I create work. It slowed it down. I’m an observational comic which means I need to experience things in order to be inspired, and as there was nothing going on, the creative process also came to a stand-still. It did however cause me to reflect on my life a lot more, and take in the things that really mattered. I think it was a good thing to slow down. You see more when you’re not rushing.

I think the idea of ‘Cancel Culture’ should be expelled from social narrative. There are definitely better ways to handle offense than the current ‘mob mentality’. An opinion which ironically will now get me ‘cancelled’.

Dave Chappelle. I like the way he thinks. Not always the way he presents things but I do respect what he has made of his career.

Focus on the writing and get people on board to help you that know what they are doing. Also, make sure you write the show for you first.

Emmanuel Sonubi’s debut stand up show ‘Emancipated’ will be at the Underbelly Bristo Square from 3rd to 28th August for tickets go to www.edfringe.com 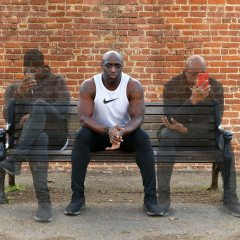 We speak to comedian Emmanuel Sonubi about his Edinburgh Fringe debut, and whether cancel culture has a place in the social narrative.