An insightful and convincing show about the reality of our future

Watching You’re Safe Til 2024: Deep History is like watching a day in the life of the climate crisis delivered by a TedTalker on his day off. David Finnigan, an Aussie actor turned climate scientist, is surprisingly understated given the extinction level event on our planet’s horizon. The easiness of the show, its conversational matter-of-factness, is probably deliberate given the dark state of things. Panic isn’t productive, David suggests, but a little urgency wouldn't hurt either.

And the story is a dark one, if not entirely unique in its threat. Written over 72 hours in 2019 during a period of unprecedented and devastating wildfires in Australia, David tells a twin story of deep time - snippets from our past as a species - and the modern climate emergency. Humans have nearly gone extinct before, our numbers as a species being reduced to the thousands around 100,000 years ago.

To give a sense of scale, David sprinkles a few grains of sugar onto a table, each grain representing a hundred of us. The analogy was devised by Jack, an old school friend of David’s who first encouraged him into drama. We learn Jack and his family are dangerously close to the wildfires spreading across Oz, as the two stories unfold in tandem.

Diary and the history of the Anthropocene culminate in a touching narrative that manages to feel personal while also conveying the sweep of human life until now. The smattering of sugar grows into a little mountain and soon collapses under its own weight. Grains spill on the floor, forgotten, lost in landslide. The analogy feels makeshift, but as time marches on so does the Homo sapiens in their fight for survival against the odds.

Perhaps there are lessons to be learned here. Perhaps not. Either way, not all of us will make it in this history of deep time. The Neanderthal, a fellow hominid who lived along side us as companions, family and lovers, went the way of the dodo despite their reportedly larger brain size. So what advantage, if not rationale, can we draw on to help us face the world burning today?

In a way, David’s show is an attempt to answer that question. The facts - widely reported in mass media since the 90s by climate scientists like David’s father - have failed to convince us of the emergency we face. I’m not sure art like You’re Not Safe Til 2024 is going to serve us any better. The show is not worse off for trying, far from it.

A man with a slideshow, found footage pulled from the internet, memories of his father, snatches of badly remixed pop music - I'm moved by David's story. It's the most compelling one I've been told yet about the climate crisis. However the show’s make-do quality sometimes feels jarring as it approaches themes of eras and irreparable world harm.

There’s no grand performance or theatre in You’re Safe Til 2024. Perhaps it doesn't need it: the news is terrifying enough. Ambitious, educative, and hopeful without false optimism. 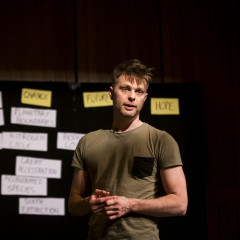 An insightful and convincing show about the reality of our future