An exciting showcase of a new wave of British musical talent

"The band’s infectious energy and enthusiasm never failed to deliver”

The gig opened with a bang with a set from psychedelic rock band Savannah, bringing epic guitar riffs reminiscent of the classic British Rock of The Who and The Stone Roses, as well as psychedelic loops and rhythms, to the stage. The band’s infectious energy and enthusiasm never failed to deliver, and soon had the crowd dancing along to the band’s feel-good sound. Their setlist was a mix of new and old tunes written by Savannah, and I for one am eager to hear what the band does next.

“meaningful lyrics that speak directly to the heart, all brought to life by his beautiful voice”

After a break for soundcheck, the next act was Ruby Allen. Supported by their dad on guitar; they sung a collection of acoustic covers of classic rock and emo songs by the likes of Nirvana and The Killers as well as original music. Where Ruby really shined was when they performed their own songs (accompanied by their charming light-up ukulele), which revealed their aptitude for drawing the complexities of life into meaningful lyrics that speak directly to the heart, all brought to life by their beautiful voice. With a style that is both distinctive, yet reminiscent of popular acts such as Cavetown and Mxmtoon, I’m sure Ruby Allen has a bright future ahead of them, and I can’t wait to hear it.

There was then another break for soundcheck, in which everyone took the opportunity to listen to the DJ set from DJ Buzzword and explore the peace of the Hive’s courtyard garden, as well and sampling the food and drink on offer.

Then we were all back for the next artist: the incredibly talented Calum Ingram. Calum’s music is like nothing I’d ever heard before: blending his eclectic influences of rock, ambient, folk and many others into a unique mix that left the entire audience in a quiet daze. It was a truly mesmerising performance. With just himself, his cello (and occasionally guitar), and his looper machine, the Scottish cellist and singer brought an exquisite emotional rawness to his performance that left each audience member feeling as though they were being spoken to directly. Calum performed a mix of release and unreleased material, with some of it set to be on his new album early next year, including tracks such as the breathtaking Japan, inspired by his housemate and drummer who was from Japan, and who was a “beacon of light” at a dark time. I can’t wait.

The closing set of the night was from Spilt Milk Society (you can read and listen to my interview with them here), who delivered a performance imbued with their own special mix of heartfelt lyricism and general mischievousness. Following on from airplay on Radio 1, Radio 2, and Radio 6 Music; as well as the release of their new EP Community the day before, their set saw the band transforming their intricately reflective lyrics and melodies into anthems for a good time. There was a mix of songs from their back catalogue of indie-rock records; as well as their indie folk-rock and Bossa Nova inspired new material. If this gig was anything to go by, Spilt Milk Society have an exciting future ahead of them.

Sounds To Look Forward To was tremendous fun, it has left me with a new collection of favourite bands and artists, and there was such a variety of sounds on offer that there really was something for everyone. Due to the intimate nature of the Hive’s performance space there was a wonderful feeling throughout the night of the lines between musician and audience becoming blurred; so that the night simply became a celebration of music in all its forms, from quiet reflection to joyful escape, and it was a joy to witness. If the Hive puts on a similar event again, I for sure will be first in line to go see it. 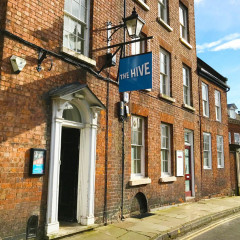 The Hive Shrewsbury "Sounds to Look Forward To" Event Review

An exciting showcase of a new wave of British musical talent