A landmark album for the British teenager

Mellow Moon, the debut album from teenage British singer-songwriter Alfie Templeman, is a record of refreshing honesty. There’s been a lovely shift in Alfie Templeman’s style in this album: a new frankness, and bigger pop production than ever; along with a glimpse of some new experimentalism on songs like Take Some Time Away. However, this album is still scattered with Alfie’s recognisable style, rhythm, and infectious joy on tracks such as Colour me blue and Galaxy, which easily could fit into Alfie’s previous mini-album Forever Isn’t Long Enough; while Best Feeling feels like it could belong on Alfie’s sophomore EP Sunday Morning Cereal with its breezy, optimistic view on love; perhaps unsurprising for a song that started as a Tinder advert.

There is a new seriousness to this album though: Alfie is much more personal and in touch with his emotions here than he has ever been with his previous records. Many of his lyrics on Mellow Moon explore the issues and emotions of a person alive in the world today, rather than focusing on the romantic fantasies that characterised his previous releases. Yet this doesn’t bring the album down in energy: Templeman’s distinctive and energetic indie pop makes a wonderful contrast between the dance-ability of the tracks and their emotional honesty.

And that’s not to say Templeman hasn’t branched out sonically either: You’re a liar and Take Some Time Away show Alfie’s Leon Bridges and Khruangbin influences. However the real strength of this album is its combination of modern pop and honest descriptions of modern life. Tracks such as Do It deal with the modern pandemic of depression: “I’m so tired of being like this”; “midlife crisis at the age of eighteen” sings Templeman in the tongue-in-cheek take on 80s motivational videos. 3D Feelings is a song about being confronted with your past; whilst Folding Mountains and early single Broken deal with growing up and realising that “this was a marathon not a sprint” and that life is hard and that accepting yourself and your flaws takes time. A lot of the tracks on Mellow Moon, such as Candyfloss, deal with the realisation that “life can sometimes appear too good to be true”, and how this can lead to feelings of defeat and feeling “Maybe life’s a little too hard for us”, an experience common to many teenagers. However, the album is perhaps best encapsulated by its title track, which explores Alfie’s struggle with depression through a love song format.

The whole album perfectly blends instrumental experimentation with pop production; emotional honesty with positivity; and the album closer, Just Below the Above brings a surprise that makes me even more excited for what Alfie Templeman will do next. The track has a raw acoustic sadness that Alfie’s has never before revealed in his music; made even more striking by its contrast to the rest of his music: a closing track which seals Mellow Moon not only as a good album, but as a great landmark for Alfie Templeman. 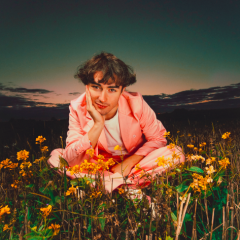 A landmark album for the British teenager