Django in Pain is an hour long table-top puppet piece about a man, named Django, who is severely depressed. When he tries to act on his suicidal ideations however, his attempts are repeatedly thwarted, largely because of a dog who he eventually names Trippy. (There are three reasons for that name – one for each of the dog’s legs.)

Over the course of the hour-long runtime, Django goes through quite the rollercoaster of emotion. He attempts suicide more than once, but the humour present throughout – as well as the overt presence of the puppeteers – helps to ease the sombre, heavy themes and make it an overall enjoyable experience.

The presence of the puppeteers and some of the other technical aspects may be seen as amateurish to some (and that may be the case – I am not especially well-versed in the art of table-top puppetry). When you learn however that the creators, Ana Graham and Antonio Vega, made the entire project in their apartment while in lockdown using whatever materials they had to hand, it becomes quite an impressive achievement. It was also produced entirely on a mobile phone. Regardless of how it was made, the presence of the puppeteers adds a sort of alluring charm to the whole thing anyway, and it’s admirable that it’s still easy to be sucked into a story about a puppet when you can see people moving him around the whole time.

That’s a testament to the sound design too – the music added a lot, as did the voiceover, and the fact that Vega himself and his writing process is intertwined with Django’s story adds more layers to this piece. Again, it also turns what could have been an excessively dreary tale into a more introspective piece of art.

All in all, Django in Pain is a very impressive piece of table-top puppetry. As someone who has never engaged much (if at all) with the art form, I was surprised by not only how enjoyable it is, but also how affecting something like this can be. The creativity on display from Vega and Graham to create the entire thing in lockdown in their apartment is admirable, especially considering how good it all looked – some of the scenes that used silhouetting were technically brilliant. There were sad moments, there were funny moments, and by the end it was both charming and lovely, which was a great route for it to take considering the sombre start. 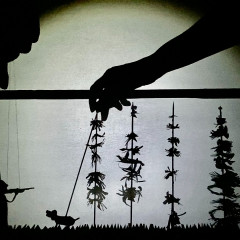