A Jim Royle-esq bald slob sits in his armchair. Around him are empty crisp packets, mouldy walls and Stella cans steadily releasing sticky lager to the delight of a couple of flies. He’s a salt addict, shovelling down crisp after crisp as he flicks through the channels on his TV. As his lamp breaks, an advert flashes on TV promising magical healing. It is a salt lamp, and Dave instantly orders.

On the day it arrives he has run out of his favourite salty crisp snack, having to resort to a plain packet instead. That is until he catches a glimpse of the box his lamp came in. You can see the cogs whirring in silent Dave’s head as he makes the connection between the lamp and his crisps – salt. You watch with one eye closed, as he begins to take chunks out of his salt lamp and put them in his plain crisps. The result is a trippy experience for Dave. There are potatoes with eyes and a colourful sequence ensues. In reality he’s having a disturbing seizure which eventually kills him.

Madden’s animation is simple but brilliant. She continues a British tradition of stop-motion animation that captures the everyday, similar to the likes of Wallace & Gromit. The main difference is it's so disgusting you want to look away. From Dave’s living room to his horrific seizure, complete with a frothing mouth and bloodshot eyes, it is not easy to watch. However, the fact you stay for the whole short is a testament to the humour and storytelling Madden conveys.

It is a shocking ending, any hopes of Dave becoming enlightened and leaving his slobbish ways behind quickly dashed. This does not feel like a statement, however. Instead the piece feels like it is a bunch of clever ideas and jokes mixed together to create something funny and enjoyable for the viewer. Accessible humour ensures this short can appeal to everyone, but feels particularly connected to Madden’s hometown of Liverpool – especially with Dave’s clothing reference to Jim Royle.

Despite the simplicity of plot and the humour, the short is incredibly well thought out and intricate. These details are evident across the film from the crunchy crisp packets, to Dave’s disgustingly wriggly arm hairs that look like worms. Dave is a fully realised slob, yet strangely endearing and you genuinely hope he can reach enlightenment.

For those who may need a significant plot, or want to feel something from a short, this maybe isn’t the one for you. However, if you want to be taken on a wacky, entertaining journey and enjoy someone’s creativity, ‘Divination Dave’ is definitely worth a watch. 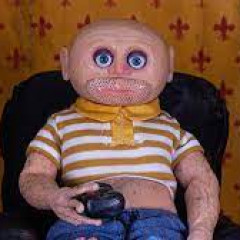