A fitting end to an otherwise mediocre series

Spoilers for the last time!

I've been a fan of Peaky Blinders for what feels like forever. The sharp suits, dodgy deals, The Garrison, and of course the peaked caps have become iconic elements of British culture that millions across the world have tuned in to watch for nearly a decade. Peaky Blinders is now weaving through the fabric of society in the UK, so the show coming to an end feels like a loss to many.

Episode six ran for an extended period of 1 hour 20. Initially, I was rather apprehensive about this, as the series as a whole felt rather flat (perhaps due to the absence of Helen McCrory). However it seems creator Stephen knight made up for this in the final episode of the show with subtle references to past seasons and a well loved twist at the end. Finn Shelby also played a bigger role in the finale which I'm sure many of us are relieved about, given the online discourse surrounding his absence throughout the series.

The plot followed Tommy as he went to Canada to pick up an opium shipment worth £5 million in a bid to secure his family’s future following his terminal diagnosis. It turns out however that this was a trap after Michael used Billy Grade (an employee in the Shelby betting shop) as an informant in his plan to kill Tommy. The peaky boys soon found out though as Billy was later shot dead whilst Tommy had Johnny Dogs make sure Michael’s plan didn’t go ahead as well… planned. As Michael emerges and realises Tommy isn’t dead it seems it was time for Michael to be with his mum as Tommy shoots him dead. Although this storyline did add much needed substance to the final series, as a fan I can only feel saddened that Tommy and Michael’s relationship didn’t stay as strong as it was in previous series.

In the final scenes we see how Tommy says goodbye to the Shelby clan and moves to the middle of nowhere in preparation for his death. Tommy’s late daughter comes to him in his mind and warns him he’s not really sick and to start burning the fire to keep warm. As Tommy goes to light the fire with some newspaper he notices how his doctor was at Oswald Mosely’s wedding and that his terminal illness was in fact an elaborate plan for him to take his own life.

After going to confront his doctor, Tommy returns to where he was going to die. This final scene had the most beautiful cinematography of all. True peaky fans will remember when we were first introduced to him riding through the streets of Small Heath on a black horse as a metaphor of death and darkness. This time though Tommy exited the series on a white horse, paying homage to still being alive, and the show’s continuation as the Peaky Blinders movie has already been confirmed.

We are all unaware of the movie plot but given the ending of series 6, one can only assume Tommy will return home and we’ll see much loved characters once again… by order of the Peaky Blinders! 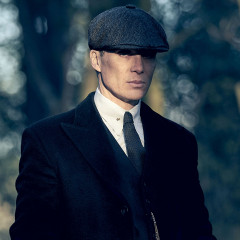 A fitting end to an otherwise mediocre series