Scottish rock trio Biffy Clyro have become a household name in recent years, with nine studio albums, four NME Awards including Best British band, as well as their latest album ‘A Celebration of Endings’ reaching number one in the UK. As part of Radio X presents, the band performed an intimate gig at Hackney Church which is now available to stream online.

Kicking off the show with ‘Haru Urara’ it was evident this show was going to be more than just a standard 25 minute set. The gentle tapping of the drums and raw, exposed vocal brought the realisation that you were about to witness a soul-bearing performance packed full of truth and emotion. Opting for an acoustic setup instantly made the room feel smaller – even over screen. The intimacy of the gig is really something that shines through from the second you hit play whilst the audience ever so gently clapped and swayed along.

‘Black Chandelier’ marked a real spiritual moment in the set, where the crowd really feels at one with the band. It was almost as if the stage and audience divide simply didn’t exist, and it certainly didn't matter. The acoustics made the track incredibly mellow and gave the tune an incredibly soothing quality whilst still allowing the crowd to have the excitement of singing along – striking the perfect balance between energy and relaxation. On the other hand, ‘Existed’ created a more power-driven moment as the vocals felt slightly more purposeful, creating impact on delivery and reverting to the band’s more rocky ways.

The band were submerged in dark purple lighting whilst the arch-shaped lighting backdrop behind them added a bohemian feel to the setting, reminiscent of a festival show in a small tent, creating more of an up close and personal atmosphere.

‘Re-Arrange’ features some of the most gut-wrenching lyrics of the night, alongside a smear of optimism. Its placement in the set was nothing short of perfection. It was a pure, cathartic moment before the big finish.

So what was the big finish? It was of course ‘Many Of Horror’. Another moment of communion, ‘Many Of Horror' is by far the band’s most recognised track. The way the crowd were able to take over the chorus so simultaneously really brought everyone together, even when watching it through a screen. After so long without live music this show of real passion and love was exactly what I needed to see and hear.

As someone who rather embarrassingly has never been a self-proclaimed Biffy Clyro fan, this performance really changed my mind and they're certainly a band I'll be checking out live at the earliest opportunity. 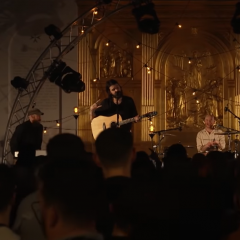