Unapologetic, a short five-minute “fashion dance film,” is a New Creatives piece where dancers explore their identity through movement and music.

For me, the best thing about Unapologetic was how well it created a sense of dreamy ambience. The dance routine takes place in one pitch black room, lit only by a few dim lights that surround the dancers. The lights are various colours, and as the camera circles around the performers, we see the different coloured lights reflecting off their skin. The sound works harmoniously with the lighting and circling handheld camera, too, with ambient sounds playing alongside eerie vocals and a whispery voice that echoes each time it repeats various words and phrases. It all works wonderfully well together to create an oneiric atmosphere and a sense of ambience that makes the whole thing rather hypnotic, which is exactly what you want from a dance routine like this one.

As someone who knows relatively little about dance, the choreography in Unapologetic gave me the impression that these people were slowly discovering themselves and learning to accept who they are, as well as accepting each other for who they are too. The movements towards the beginning are much more independent and separate from each other, but as it approaches the end, the three of them slowly come together and become more in sync with one another. There are some heavy themes surrounding gender identity too. Some of the words that are repeatedly echoed include “dirt, grit, and spit” and “elegance” which may be symbolising the gender binary of masculine and feminine, and perhaps critiquing it, as the dancers slowly overcome that binary, seeing gender as more of a spectrum. One of the dancers is wearing a chest binder, while another wears a more effeminate gown, again symbolising a sort of gender binary and raising questions about it.

The themes around discovering and accepting oneself are also relevant to the themes around gender. The chest binder is again relevant, as it may be commenting on dysphoria, and the eerie music may be there to reflect the discomfort of gender dysphoria. The lighting is again relevant here, as the colours from the various lights are colours of the rainbow, which is probably the most famous LGBTQ+ symbol.

Unapologetic is a very interesting short film that has an awful lot to say about identity and gender even in a short runtime, and it does a wonderful job of creating a dreamy sense of ambience that makes the whole thing rather captivating, even to someone who doesn’t know much about dance or choreography. 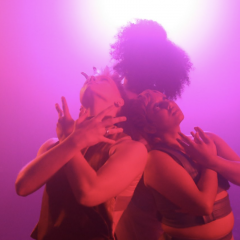 Unapologetic, a short five-minute “fashion dance film,” is a New Creatives piece where dancers explore their identity through movement and music.