I went to see the Wyndham's Theatre production of Life of Pi in London. In my review I focus on the puppetry used to convey and enhance the story.

In the Wyndham’s theatre, there is currently a production which can make you believe in life. Finn Caldwell is the puppetry and movement director for the highly acclaimed Life of Pi, the show that follows the journey of a young boy lost at sea for an unendurable amount of time. However, there is also the added complication of wild animals also being stuck on the same boat, which invites the question – how do you show that onstage? The answer this company used: puppetry, which is ‘out of this world’ (Mail on Sunday) and brings to life the creatures great and small that influence the story so heavily.

Finn Caldwell was heavily involved in the creation of the unforgettable War Horse, with the Handspring Theatre Company, who specialise in puppetry. It was through this company Caldwell trained as a puppeteer, taking the role of one of the first horse puppeteers and finally becoming a long-term associate of the company. Therefore, I was expecting similar designs and materials used to create the horses in the formation of the tiger, orangutan, hyena, and zebra for this production. Although it seemed that the plywood exteriors that were critical to the creation of the horses in War Horse were not used to frame the puppets, they still each had what Adrian Kohler and Basil Jones, co-founders of Handspring, named the most important aspect of a puppet – the ability to breath. This is what makes them alive and believable; small movements of chest inhalations and compressions to depict life. The phrase ‘turning nouns into verbs,’ frequently stated by Kohler, truly provides and insight into the thinking behind Caldwell's puppetry training. Kohler uses the ‘nouns’ to build movement into the puppets, creating ‘verbs’ so that the audience believe it is alive, which was taken on board by Caldwell in his creative process for Life of Pi. In addition to this quality, certain elements were incredibly similar to the puppets of War Horse, such as the string used to move the front paw when the front leg is elevated, to give the impression of an animal deliberating putting their foot on the ground.

Caldwell is also an artistic director of the puppetry company Gyre and Gimble, whose aim is to ‘expand audience’s expectations of what puppetry is capable of, whilst inspiring and nurturing a passion in those discovering the art form.’ (Gyre and Gimble official website) This aim was certainly achieved through Caldwell’s work on Life of Pi, as many in the audience, including myself, felt inspired by the puppetry and creation of characters that could display such a variety of emotion despite being inanimate objects.

The production itself was spectacular, particularly in the interaction between puppet and actor. The four actors/puppeteers controlling Richard Parker (the lively and aggressive tiger) were not individuals but one entity controlling the tiger, so that they breathed, moved, and it would seem thought, at the same time. In addition to this, the puppeteers displayed the animal’s emotions through their own physicality and facial expression, adding to the portrayal of the animal’s thoughts. However, for much of the production this was not noticeable simply because as an audience member, you were only aware of the puppet, and forgot about the puppeteers.

This, I believe is the key sign that the puppetry has worked; when the puppet has surpassed being a puppet, and is instead a living, breathing character onstage, equal to the ‘real’ human characters. 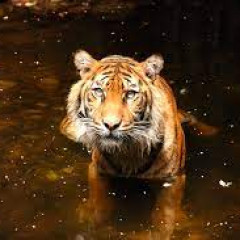 I went to see the Wyndham's Theatre production of Life of Pi in London. In my review I focus on the puppetry used to convey and enhance the story. 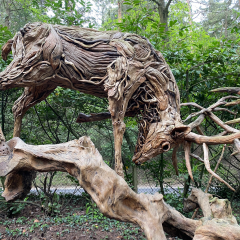