Patrick Sims is one of five artists commissioned by the London International Mime Festival to create a short film that isn’t driven by spoken text as part of the festival’s online material.

Patrick Sim’s short film entry in the London International Mime Festival is unexpectedly moving, making things that should be creepy instead incredibly charming and delightful. The piece is based on Pinocchio, following him through the whale’s stomach as he carves out a little life for himself there.

The film is constructed using intricate sets and marionette puppets that are reminiscent of stop motion geniuses such as Jan Švankmajer or the Brothers Quay with details such as Pinocchio’s donkey-eared skull of a head, only Sim’s work seems somehow sweeter. The Ribs & Terror conveys such emotion and warmth despite its odd appearance and slightly grim subject matter, making good out of the bad in the eerie and gorgeous world that Sim has created.

In the whale’s stomach, Pinocchio enjoys his new life, getting acquainted with the other inhabitants: curling up inside a clam next to its pearl, helping a pelican with plastic caught in its beak, and starting an electropunk band with a squid. As you can imagine, all of this wreaks havoc with the whale’s stomach, as it sits on the toilet in its underwater bathroom seeming quite distressed. 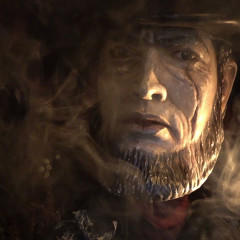