Dewey Dell are one of five artists commissioned by the London International Mime Festival to create a short film that isn’t driven by spoken text as part of the festival’s online material.

The group take inspiration from the natural world, which can be seen in the tree formations which they note as echoing our nervous and vascular systems, and in the movements of silhouetted dancers, moving as one organism, one minute a frog, the next an insect, and so on.

The imagery and sound design feel ritualistic and almost ancient, as if some unknown deity is being portrayed or spoken to. In this lies both the disquieting and the reassuring elements of Dewey Dell’s film, seeming both divine and profane.

The most fascinating part of the work is the choreography and the way that the dancers have pulled it off, their silhouettes appearing as one multi-limbed shape moving in such synchronicity that it feels a privilege to watch. 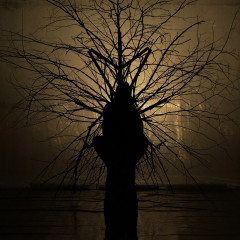 Review: Dewey Dell – They Rise and They Fall