The public feud over Black Widow’s simultaneous release in cinemas and on Disney+ has been settled out of court.

The A-list movie star first brought the suit to Disney around two months ago, claiming that the release of Black Widow on Disney+ was in breach of her contract and undermined the blockbuster’s performance in theatres and cinemas.

Johansson’s representatives argued that the House of Mouse made a decision to partially sacrifice the film’s box office earnings in order to rake in further profits from their paid subscription streaming service. It seemed Disney felt that Johansson was taking the Mickey as they retaliated by emphasising that the actor was paid $20 million for her role as the titular assassin-gone-hero.

No specifics have been given as to the outcome of the lawsuit, but from all accounts it sounds like a very amicable agreement has been reached. Chair of Disney Studios Alan Bergman has said “I’m very pleased that we have been able to come to a mutual agreement with Scarlett Johansson regarding Black Widow. We appreciate her contributions to the Marvel Cinematic Universe and look forward to working together on a number of upcoming projects”.

Johansson reinforced this impression of mutual benefit by declaring that she is “incredibly proud of the work we’ve done together over the years and have greatly enjoyed my creative relationship with the team. I look forward to continuing our collaboration in years to come”.

Other actors in the MCU have given relatively neutral comments on the legal battle, with Doctor Strange’s Benedict Cumberbatch proclaiming the situation to be “sad” and “a bit of a mess”. Black Widow co-star O.T. Fagbenle made his opinion a little more overt with the affirmation that "Ultimately, I do believe that all workers should get paid fairly. To be honest, the workers I think about most are those who are on minimum wage."

There has been some criticism of Johansson for seeking further millions in the midst of the Covid-19 crisis. The Walt Disney Company, in a comment made to The Independent, argued that “The lawsuit is especially sad and distressing in its callous disregard for the horrific and prolonged global effects of the Covid-19 pandemic”.

The company — valued at around 200 billion dollars — furloughed over 100 000 workers during the pandemic but decided to continue with its executive bonus programme. Disney’s leaders claimed they had “no choice” but to stop paying their employees, although the option to earn millions in incentive schemes was apparently still very much available to the top brass.

There has been a certain level of scrutiny attached to the Black Widow case. With streaming services steaming ahead during the pandemic, many are beginning to wonder if paid subscriptions are the future of cinema. Any case involving the streaming giants will set a precedent for years to come.

Header Image Credit: "Scarlett Johansson" by mbtrama is licensed under CC BY 2.0 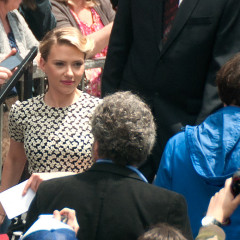 The public feud over Black Widow’s simultaneous release in cinemas and on Disney+ has been settled out of court.