The referendum, if confirmed, will not occur until the pandemic is “under control”.

Scottish first minister Nicola Sturgeon has concluded her speech at the SNP conference by calling for a second referendum on Scottish independence. On this, the final day of the conference, Sturgeon stated: “As we emerge from the pandemic, decisions fall to be made that will shape Scotland for decades to come. So we must decide. Who should be making those decisions: people here in Scotland or governments we don’t vote for at Westminster.”

Sturgeon has called upon the UK government to recognize and support the referendum, stating that the Scottish parliament’s approach will be “co-operation not confrontation”, going on to say, “So it is in that spirit of co-operation that I hope the Scottish and UK governments can reach agreement”, concluding that “Democracy must - and will - prevail.”

However, if a referendum is to go ahead, it will not be until the coronavirus pandemic is “under control”, although preferably by the end of 2023. Sturgeon has stated that she will not “set a precise level of infection” for plans to go ahead but that “you would want to see the COVID situation under control". The SNP membership, which won 535 votes to 10, have supported that the decision, when made “should be determined by data-driven criteria about the clear end to the public health crisis, which would allow a full, normal and energetic referendum campaign.”

The outlook on support for the referendum from Westminster does not look hopeful. Speaking on Scottish independence in March, Boris Johnson said, “When you ask people to vote on a highly controversial and divisive issue, an issue that breaks up family relationships, that is extremely toxic and divisive, and you tell them this is going to happen only once in a generation, I think you should stick to it.”

However, Sturgeon has stressed that a referendum will not cause the rift that people assume it will, stating, "As an independent country, co-operation between Scotland and our friends across the rest of the UK will continue, but it will be on a better basis: Scotland will be an equal partner." 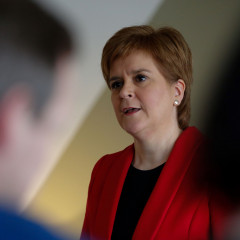 The referendum, if confirmed, will not occur until the pandemic is “under control”.