Voice MagNewsBoris Johnson is the…

Boris Johnson has won the support of the Conservative Party to become the new leader, and the new Prime Minister of the United Kingdom.

In his acceptance speech, Mr Johnson reiterated his commitment to delivering Brexit by 31 October with a “new spirit of can-do”.

“We are once again going to believe in ourselves and what we can achieve, and like some slumbering giant we are going to rise and ping off the guy-ropes of self-doubt and negativity.”

He also stressed the importance of uniting the country and defeating Jeremy Corbyn.

Mr Johnson takes over leadership at a difficult time for the Conservative Party and the wider political climate. The Conservatives have a thin working parliamentary majority, propped up by the DUP, and this could be further eroded should they lose two by-elections next week.

Groups are also coalescing to challenge Mr Johnson in Parliament, angered by his suggestions of proroguing Parliament to force a no-deal Brexit. A number of current cabinet ministers, including Chancellor Philip Hammond have said they will resign rather than serve under him - although it is likely that Mr Johnson will be reshuffling the cabinet after he officially becomes Prime Minister of Wednesday afternoon.

Theresa May will face her final Prime Minister’s questions in the House of Commons tomorrow, before tendering her resignation to the Queen at Buckingham Palace. Mr Johnson will then go to the Palace himself for his position to be confirmed, before giving a speech outside 10 Downing Street. 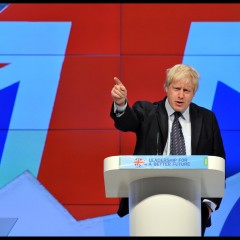