The Golden Globes kick off the Hollywood award season, and given the results here, it’s safe to say that nothing is a sure thing.

Spider-Man: Into the Spider-Verse took Best animated feature film, an incredible feat given its stiff competition.

Olivia Colman walked away with Best actress in a musical/comedy, and Christian Bale won in the male category - two big wins for British talent.

Firm favourite A Star is Born was largely snubbed, winning just the one award for Best Song. Lead actress Lady Gaga missed out on the award for Best actress in a drama to Glenn Close, and the film was pipped to the post for Best film (drama) by Bohemian Rhapsody, which was the shock big winner of the evening. The Freddie Mercury biopic received mixed reviews from critics but won the Best film (drama), and Rami Malek walked away with best actor.

Best actor in a TV series – musical or comedy

Sacha Baron Cohen – Who Is America?

WINNER: Spider-Man: Into the Spider-Verse

Best supporting actor in a limited series or TV movie

Best actress in a limited series or TV movie

All the Stars – Black Panther

Girl in the Movies – Dumplin’

WINNER: Shallow – A Star Is Born

Richard E Grant – Can You Ever Forgive Me?

Best supporting actress in a limited series or TV movie

Best actor in a limited series or TV movie

Bradley Cooper – A Star Is Born

Best actress in a TV series – musical or comedy

Debra Messing – Will and Grace

Lady Gaga – A Star Is Born

Melissa McCarthy – Can You Ever Forgive Me?

Bradley Cooper – A Star Is Born

If Beale Street Could Talk

A Star Is Born 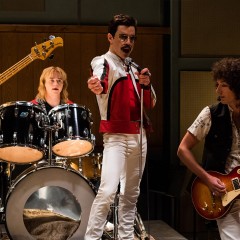