It was recently announced that the Everyman Theatre in Liverpool will be introducing a new repertory theatre company, something the theatre hasn't done for over 25 years.

The company will be bringing in 14 actors to join the company who will be working together on several shows from February until June 2017.

The last time the theatre had a rep company it included actors such as Julie Walters and Bill Nighy who had yet became the legendary figures in British drama that they are today. The company held open auditions to join the company but the new actors will also be joined by performers with more experience. Richard Bremmer will be joining the company, Richard is known or playing Lord Voldemort in Harry Potter and the Philosopher's Stone, before Ralph Fiennes famously took on the role.

The 13 actors who are joining Bremmer including Patrick Brennan, an actor who has visited the theatre on several occasions with touring companies. The first time he came to the Everyman was when he performed Crouch, Touch, Pause, Engage. Pauline Daniels, Elliot Davis, Laura Dos Santos, Emily Hughes, Liam Tobin, Tom Kanji, Asha Kingsley, George Caple Melanie La Barrie, Dean Nolan, Keddy Sutton and Zelina Rebeiro are also joining. You can find out more about these actors on the Everyman website. It's great to look through the company and see so many amazing performers who came from the same areas in the North West as myself.

The fantastic thing about the company is the age range, the company haven't just gone for the sparkly, squeaky faced 'just out of drama school' actors. You can tell just by looking at the company that they are serious about attracting a wide audience and they can take on a wide range of shows because they aren't tied down by casting just young people.

The company have announced five different shows so far ranging from Romeo and Juliet to Fiddler on the Roof. Fiddler, being the company's first show, opens on 17 February and runs until 11 March before The Conquest of the South Pole opens on 24 March. The other show dates and ticket prices can be found on the website: everymanplayhouse.com 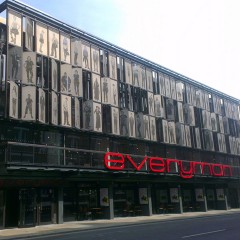 It was recently announced that the Everyman Theatre in Liverpool will be introducing a new repertory theatre company, something the theatre hasn't done for over 25 years.