In what was a hollow celebration, this year's Tony Awards took place barely after the Orlando massacre.

As a result, the Tony Awards can boast being the first televised tribute to the victims and their families. This year can also boast the most diverse set of nominations and winners in Tony history and the highest viewing figures for 15 years - all of this almost single-handedly because of the trailblazer musical, Hamilton, by Lin-Manuel Miranda.

James Corden was on hand to pay tribute and lift sallow spirits and did so expertly. His opening bit reminded everyone of his own Tony Award winning theatrical talents. Other performers included the casts of the winners of all top four awards. Noteworthy wins went to first-timer Jessica Lange for Best Actress in a Play (Long Day's Journey Into the Night), otherwise famous for her award-winning turn in American Horror Story on TV, in a category made up entirely by Emmy/Golden Globe/Oscar winning actresses, Hamilton winning an eye-watering 11 Tonys in one night - one short of the record 12 set by The Producers - and British actress, Cynthia Erivo, won the coveted award for Best Actress in a Musical (The Color Purple). The other high profile British win of the night came for the predominantly British cast of the Best Revival of a Play, View From A Bridge, including Mark Strong, Russell Tovey, Nicola Walker, and Phoebe Fox. The Humans won four awards including for Best Play.

Best Revival of a Play

Best Revival of a Musical

Best Book of a Musical

Best Original Score (Music and/or Lyrics) Written for the Theatre

Best Scenic Design of a Play

Best Scenic Design of a Musical

Best Costume Design of a Play

Best Costume Design of a Musical

Best Lighting Design of a Play

Best Lighting Design of a Musical

Best Direction of a Play

Best Direction of a Musical

Special Tony Award for Lifetime Achievement in the Theatre

Tony Honours for Excellence in the Theatre 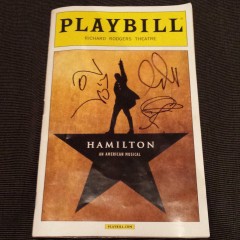 In what was a hollow celebration, this year's Tony Awards took place barely after the Orlando massacre.