Redt’Blue is finally making its eagerly anticipated debut on the big screen on 26 February.

Jay Martin’s political documentary ‘Redt’Blue’, is set to make its big-screen debut later this month. On February 26, Redt'Blue will be finally premiering at the Broadway Cinema in Nottingham, after its release was delayed.

What is it about?

The award-winning documentary chronicles the story of the constituency of the mining town, Mansfield. Mansfield was historically a safe ‘red’ seat and was held by Labour for ninety-four consecutive years. The 2017 election changed everything as it was one of the first historically safe red seats to go ‘blue’, Mansfield voted Conservative and swapped out Sir Alan Meale (Labour) for Ben Bradley (Conservative). Martin documents this unprecedented political event and how the town went from “Redt’Blue”.

Martin forgoes putting a political spin on things and objectively explores why this change had occurred. The film draws on the perspectives of some of the major players who themselves were involved within the story.

Martin’s efforts have not gone unnoticed, and his film received over five awards for best documentary. This is without even mentioning the plethora of praise lauded upon it with high ratings by the likes of Indie Shorts Mag, LeftLion, UKFilmReview, 365FlicksPod, and of course, Voice Magazine.

Redt’Blue is a well-paced documentary short which accomplishes and delivers its aim with clarity, cohesion and a reminder of how far the UK has travelled since the 2016 referendum.

Broadway Cinema in Nottingham will be the venue that is hosting the very first premiere of Redt’Blue. You can find more information on their Facebook page and book tickets on Eventbrite. 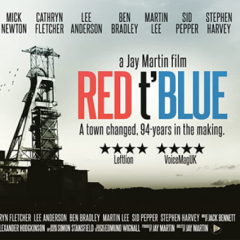 Redt’Blue is finally making its eagerly anticipated debut on the big screen on 26 February.