Mansfield constituency: a microcosm of the unrest experienced in the 2017 election. Redt’Blue takes a closer look.

Redt'Blue is a documentary short exploring the reasons for the ex-mining town constituency of Mansfield swinging from the Labour party to the Conservative party in 2017 for the first time ever.

The typical documentary keeps the viewer guessing to reveal individual stories and threads throughout the film. In contrast, Redt’Blue uses hindsight as a narrative device to both establish the cultural and political context of contemporary Mansfield and simultaneously lead the viewer through arguably the most controversial years of Mansfield’s history. Callbacks to Thatcher’s reforms and the prominent voice of an ex-pit worker ensures that Mansfield's mining history is the protagonist of Redt’Blue.

So why did Mansfield swing from a 94-year-long support of the Labour Party to voting for budding career Conservative Ben Bradley in 2017? The issues explored through the lens of ex-miners, staunch UKIP and Labour supporters and Mansfield residents are particularly pertinent to this community but also speak more widely to the landslide victory for the Conservatives in 2017.

The scene is established in 2015: a growing UKIP base, Farage referred to as “messianic” and importantly, deep-seated dissatisfaction with the Labour MP who had occupied the Labour seat since 1987. The 2017 election was “a vote of desperation, a cry for help” for change. Who better than a young Conservative to bridge the gap between a history of Trade Union support and a growing anti-immigration attitude.

Whilst the precise narrative around Manfield’s recent political journey is applaudable, what the documentary desperately lacks is a diversity of opinion. Voices from across the political spectrum were each embodied by white males, failing to do justice to the plethora of backgrounds in Mansfield. Ex-miner Mick Newton lends empathy to the narrative and incumbent MP Ben Bradley is refreshing in his youth, however the voices of first-generation immigrants remained entirely elusive and it felt as though Mansfield has not progressed from Thatcher’s era by the lack of representation given to women.

Despite this flaw which unfortunately renders the documentary shallow in its scope, Redt’Blue is a well-paced documentary short which accomplishes and delivers its aim with clarity, cohesion and a reminder of how far the UK has travelled since the 2016 referendum.

We recently interviewed filmmaker Jay Martin about how he produced Redt’Blue. You can listen to that interview below, or by subscribing to the Voice Magazine podcast. 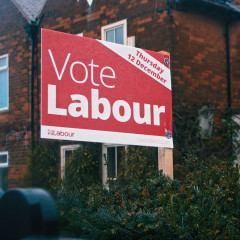 Mansfield constituency: a microcosm of the unrest experienced in the 2017 election. Redt’Blue takes a closer look.