The show has been recreated on various platforms such as social media and video games since its worldwide fame, and children are now reenacting violent challenges at school.

Central Bedfordshire council has told parents that they should not allow their children to watch Squid Game, following reports that children as young as six are attempting to reenact the violence of the show whilst on the playground. It is thought that the surge in the show’s popularity in children is down to social media influencers and video game developers recreating the deadly challenges.

The education safeguarding team from the council have sent out a mass email to parents and guardians in the area. They said: “Be vigilant, after hearing reports that children and young people are copying games and violence from hit new Netflix series Squid Game, which is rated 15. We strongly advise that children should not watch Squid Game. The show is quite graphic with a lot of violent content.”

The television show depicts a group of indebted contestants that are all competing for cash prizes, who are shot dead when failing a task. Many of the games on the show require equipment that is not easy to get hold of, but some tasks are easy enough for children to adapt, games such as marbles, tug of war and red light, green light.

Apparently, the latter is the most popular right now, traditionally known as grandmother’s footsteps or statues in the UK. The version in the programme involves an animatronic woman, who has her back turned whilst contestants move, if when she turns round they are seen moving, they are then shot. Children have been replicating the show on playgrounds across the UK, often punishing those who lose with violence.

Parents are also being warned about another challenge that is going viral on social media, the honeycomb game featured in the show, where contestants have to carve one of four shapes in a thin dish of honeycomb without it breaking. Tik Tok has made this challenge increasingly popular, and it prompts fears that children may attempt to make their own honeycomb, and then burn themselves on caramelised sugar.

The email also highlighted that the recreations are also coming in videogame form, adding: “There have been some concerning reports recently about children and young people ‘playing’ Squid Game whilst at school. Squid Game is also being viewed via other platforms such as YouTube and TikTok, and given the popularity of the games in the show, developers have made various mini-games based on Squid Game on Roblox and other gaming platforms.”

There are multiple reports of similar emails informing parents coming from schools across the country. One parent in Lincoln received an email saying pupils were reenacting scenes, and the email also “advised parents to check settings on their devices as pupils may be accessing and viewing this show without their parents’ knowledge.” 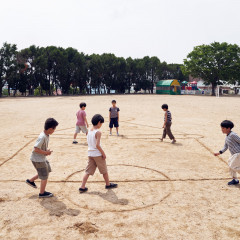 The show has been recreated on various platforms such as social media and video games since its worldwide fame, and children are now reenacting violent challenges at school.