The songs featured in Burnham’s Netflix film Inside do not classify as comedy, according to the Grammys

The Grammys are yet again being scrutinised after making the decision that Bo Burnham’s album Inside (The Songs) is ineligible for an award in the comedy music category. The track will still be nominated for the category of best compilation soundtrack for visual media. Inside (The Songs) was an album made up of songs performed by Burnham in his hit Netflix special Inside, a film that became a cultural phenomenon over the pandemic – the accompanying album released in June.

According to Billboard, Burnham’s record label, Republic, was first to confirm the decision. The Recording Academy, who organise the Grammys and shortlist nominees, don’t usually release preliminary ballots for the artists that are nominated, and the news comes directly from Republic after dissatisfaction from both Burnham and his label about the classification.

A similar situation transpired on Tuesday, when it was announced that Kacey Musgraves’ record label’s company president, Cindy Mabe, had sent a letter to Recording Academy chief executive Harvey Mason Jr. stating their issue with the Grammys placing her album Star-Crossed up for a best pop album nomination, when it was initially submitted by Universal Music Group Nashville as a country record.

Burnham’s album has been at the very top of the comedy music charts, and it has stayed there for the 18 weeks since the record’s physical release. Still, there has been no comments from the Recording Academy comedy screening committee about why the album couldn’t qualify for the Grammy shortlist.

It could be argued that the reason for its classification was because it was made for TV, rather than an audio medium, but if that was the case, last year’s winner Tiffany Haddish and her record for Black Mitzvah would also be ineligible, as it too came from a Netflix special. Many past winners of the award over the past few years have released albums in the same way, through soundtracks for comedy specials, including Bill Burr’s Paper Tiger and Jerry Seinfeld’s 23 Hours to Kill.

The track All Eyes On Me was submitted as best song for visual media by Republic, as well as song of the year and best pop solo performance. The special was submitted for best music film and album of the year too.

If Burnham had stayed within the comedy category, he would undoubtedly have been a favourite to win the award, after its reign at the top of the comedy chart. The record could still do well in the visual media soundtrack category given its popularity, but the album will seem alien compared to the scores of movies that it will be competing against. The comedian has already won three Primetime Emmy awards for Inside, one for outstanding musical direction, outstanding writing, and outstanding directing for a variety special. 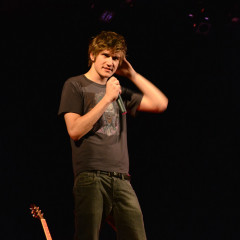 The songs featured in Burnham’s Netflix film Inside do not classify as comedy, according to the Grammys