The piece titled Love is in the Bin, which was the live destruction of the artist’s painting Girl with Balloon, has sold for a record price.

When Banksy partially shredded his iconic painting Girl with Balloon, it made waves in the art world and headlines in publications across the world. The artist has recently sold the piece at auction for a staggering amount. It is Banksy’s highest selling artwork to date.

Love is in the Bin was sold at London’s Sotheby’s for £18,582,000, far above the initial guide price of £4-6 million. Prior to its sale, Love in the Bin had been on permanent loan to the Staatsgalerie Stuttgart Museum in Germany since 2019.

Sotheby’s was the same auction house used for Banksy’s famous stunt that brought about the piece’s inception, where he shredded Girl with Balloon in front of a live audience. Girl with Balloon is undoubtedly one of Banksy’s most renowned images – it was first found spray paint stenciled on a wall in east London, and has since been replicated many times.

The original piece sold to an unnamed European woman for £1 million back in 2018. After the hammer fell at the painting’s auction, sirens blared as the canvas was dropped through a hidden shredder that was built into the painting’s Victorian frame. The stunt left half of the painting destroyed, with only the balloon left of the piece in the frame.

Chairman of modern and contemporary art at Sotheby’s Asia, Alex Branczik stated: “It is almost three years to the day since one of the most ingenious moments of performance art this century made auction history. Banksy is no stranger to making headlines and this latest chapter in his story has captured imaginations across the world – we can only begin to guess what might come next.”

Not one to stay out of the news, an apparent Banksy Non Fungible Token (NFT) was sold last month for £244,000, but was found to be fake. The piece, titled Great Distribution of the Climate Change Disaster, was bought by a buyer named Pranksy, but the currency was returned after the discovery that the piece was a hoax. 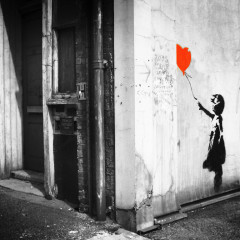 Auction record set by Banksy after selling shredded painting for over £18.5m

The piece titled Love is in the Bin, which was the live destruction of the artist’s painting Girl with Balloon, has sold for a record price.