We talk to 17-year-old Jacob Chilmaid about their film 'Christmas dinner… served stone cold', which is now showing as part of our Winter Film Festival.

I'm 17 years old, I have a MASSIVE interest in performing and just anything to do with theatre really. I never thought of theatre as a career choice until year 8 in school where I was introduced to Icon Theatre as a company, which has eventually led up to me being a part of this project, I've always made sure I attend everything I possibly can. I'm now looking at going on a university course within Brighton that will help me improve my skills as an actor and other aspects within the theatre industry

My film is a mockumentary about a family who decide to have a beef Wellington for Christmas Dinner, however it comes out of the oven cold even though it was being cooked. It's actually inspired by true events. On Christmas 2019 my parents decided we should have beef Wellington instead of the traditional turkey dinner, my mum put it in the oven – following the instructions given on the packaging – and nearly an hour later it came out of the oven, but when we began eating it the middle of it was cold.

The first thing I did for my creative process was try and recount what had happened on the day we had the beef Wellington. Once I had remembered what I could I wrote a plot and then turned it into a script.

Oh definitely. The biggest one was finding the time to work on the project, I was aiming to spend a week working on the project and ended up with just a few days due to school work and teachers setting extra work because they felt we weren't getting enough already. This was alongside the stressful research and application process to figure out which university courses I wanted to apply for.

The main thing I'm proud of was actually finishing the project – there was a section where I had to get my younger brother to help me with an interview section. To answer both what I'm proud of and what I would have done differently, the 30-second interview took us about 3 hours to recode because things weren't going right or my brother was just laughing/messing up, so I'm proud I finished that, and I think I would have asked my mum instead if I knew it was going to take that long

You can watch 'Christmas dinner... served stone cold' right now on Voice as part of our Winter Film Festival. 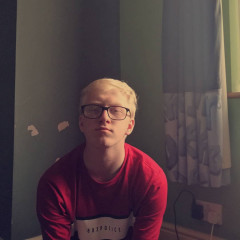 We talk to 17-year-old Jacob Chilmaid about their film 'Christmas dinner… served stone cold', which is now showing as part of our Winter Film Festival.