Bhavesh Jadva was one of the founder editors of Voice, when doing his Arts Award way back when.  He tells us what happened next…

When did you complete your Arts Award and which centre did you work with?
Bronze in 2011 and Gold in 2016, both at Peshkar Productions in Oldham.

What are you up to in your creative work at the moment?
As with many others, the pandemic has taken its toll on my career. Usually, I do research in developing ideas for new TV programmes, which involves fleshing out ideas and visualizing them using presentations and taster tapes.

At the moment I’m working as a junior researcher on a production, which is ridiculously lucky as TV shut down hard with the lockdown. I mostly do logging, which is transcribing footage to make the editing process easier. I’m itching to get back to creating stuff, though.

What are the highlights of your arts career to date?
I’ve been very fortunate to work for large and small companies developing content for a variety of channels around the world – moving around different companies coming up with a whole gamut of programmes has been invaluable.

What’s been the biggest challenge you’ve faced in your creative career since completing your Arts Award?
It’s not been easy breezy, kids. I’ve had struggles staying employed and that was before the pandemic, so keeping going, keeping motivated and playing the long game has been pretty arduous.

What do you hope to be doing in five years?
I hope to have found my place at a company where I can settle – where I’m on the same page as the execs and owners and we have a keen interest and expertise in the stuff we develop. I’d like to be in a position to run a programme of work experience or internships so I can redress certain imbalances we see in TV development at the entry-level.

So how did Arts Award help you develop your creativity or skills?
I did Bronze when I was 17. I had just started studying Photography at college because it was the only art you were allowed to do without a GCSE in Art and I was hooked on it.  So I did my Bronze on a little digital throwaway Fujifilm.

It took me a long time to finish my Gold but I got it when I was 23 after my media degree. I tied it in with a short film I did the production design for and also my writing for Voice, which happened throughout my uni studies.

Doing Arts Award definitely helped me care a bit less about what people thought. People in my small town would’ve been a bit surprised at the stick with glasses running around taking pictures of the ugliest things he could find and making a film with the money I didn’t have but I think you have to put inhibition to the side when you’re trying to get better at your art.

Arts Award was also the first time I was given full control over a task so I definitely look back on that fondly. I took tens of thousands of pictures in that photography heyday and messed around with the pictures in a really early version of Canva so it was practically guerilla. I definitely value getting all that learning with the bare minimum of resources.

Can you tell us more about what you did for Arts Award?
The Bronze was photography heavy – it was both my practice and the skills I shared with another. I did a number of photoshoots trying to document the ugliest things that were just laying around in my fairly ugly area. I got an exploded snail being circled by a fly, hopped onto construction sites I definitely wasn’t allowed on, it was electrifying!

I reviewed a piece of theatre, which was important because I’d never been to see a play just for leisure before. It was a challenge getting my head around that as something new but gave me the sense that you can critique anything if you address it properly.

My Gold included the short film, which was a heavy undertaking because I’d never done production design before and had to design, source and build a set. My leadership was getting some drama students through their Bronze Awards, which was a wild ride because they were 12 and 13!

I also wove my editorial work with Voice into it, including some of the many reviews I wrote over the years, some opinion pieces, and editing the Arts Award Voice area.

Are you still involved with Arts Award in any way and will you be doing anything to celebrate the 15 year anniversary?
Sadly not, I hung up my boots to focus on my studies and since then doing adulthood has taken up a lot of my time! If there were a physical celebration happening, I’d be there in a heartbeat.

Have you become an Arts Award adviser since completing your Arts Award?
I have and this is probably a close second for the biggest challenge in my career so far – do not underestimate the efforts your advisers go through! Four of us went into the Waterhead Academy and took a year 7 and year 8 class through their Bronze Awards. A lot of the students took it as a bit of a doss so it was very much a baptism of fire but we learned to keep their attention, which was key to getting them to focus on being creative.

What advice would you give to young people doing Arts Award who want to follow in your career footsteps?
It sounds very Hollywood but, if you have any inclination to progress, do the grunt work, work like a mule. Don’t accept anything unpaid though, and make sure you get more than just the words on your CV out of each job. When you do get hired, work above and beyond your station and make it your mission to impress the people who’ll take you to the next stage

Where can people find out more about your work?
I have a nice body of work right here on Voice at Bhavesh Jadva.

Arts Award has been supporting the development of creativity and leadership skills for all young people for 15 years. Arts Award has championed creativity, nurtured talent and offered insights into the arts world, together with a taste of creative careers. Across the UK there are over 4,000 centres and an impressive 521,455 Award achieved.

Find out what we're up to and get some ideas about what you can do to celebrate, including our #LoveArtsAward15 social media competition running until 15th November.

Read more interviews with Arts Award alumi or visit the Arts Award Voice Community Hub for exclusive alumni updates, support and discounts. If you've recently finished your Arts Award and want to let us know what you're up to, drop Nici the Arts Editor an email. 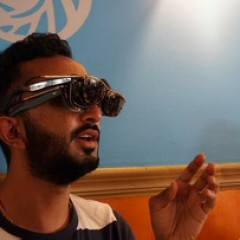 Where are they now? with Bhavesh Jadva: Arts Award 15th birthday

Bhavesh Jadva was one of the founder editors of Voice, when doing his Arts Award way back when.  He tells us what happened next…