Jess and Elise explain their love of musicals, the power of juxtaposition, and offer great advice for anyone looking to enter the film industry.

Jess Bartlett: Hi! I’m Jess Bartlett, a writer/producer based in the South West. Elise Martin and I collaborated on the New Creatives scheme to create the short musical film ‘We Got It Easy’ which we co-wrote, Elise directed and I produced.

Elise Martin: Hello! I’m Elise Martin, a short film writer/director based in the South West. With previous experience creating an award winning, original short musical I took part in the New creatives scheme along with Jess to create our film ‘We Got It Easy’. The film follows a singing ensemble of today’s youth facing struggles that may differ from previous generations, in their daily lives.

What inspired you to make ‘We Got It Easy’?

Jess: Elise and I built our working relationship at University where we collaborated a numerous amount of times, with our graduate film being the award-winning haunted house musical ‘Dearly Departed’. We were extremely excited and keen to revisit the musical genre but this time, we wanted to do it in a way which would evoke some thought – the themes behind ‘We Got It Easy’ are very serious and by delivering them through a musical format, we wanted to effectively convey these topics in an unconventional and even possibly uncomfortable way.

Elise: Jess and I found ourselves constantly discussing a lot of the issues that young people face today that older generations aren’t aware of or don’t see the impact it can have. When the scheme came along it felt like the perfect opportunity to be able to put a voice to some struggles that need more attention and understanding.

What was the creative process behind We Got It Easy?

Jess: It was really exciting to work with Calling The Shots on the New Creatives scheme, as they supported the development and production of the film. We pitched our initial idea which was to express modern issues through a musical number and after getting greenlit, we worked on the script. Much like our previous short musical, Elise and I write the script first to lock in the narrative/exactly what we want to say with the film; this then gets passed onto the talented lyricist(s)/musician(s) who rework the script into a song format for us. The rest of the process is then the same as any other non-musical short film – lots of work from the crew members to bring it to life!

Elise: Having previously made a musical together I think we both approached the project with better an understanding of the workload we were taking on. However as passionate musical fans and filmmakers we were really excited to bring this film to life and create something that challenged the viewers and it was great to have the support of Calling The Shots and the BBC to encourage us to keep pushing boundaries.

Why did you decide to focus on the experience of young people?

Jess: Every young generation has their individual struggles and issues – with their existing older generation commonly belittling these problems by saying ‘you’ve got it so easy nowadays.. when I was younger…’. This was the premise for the short as we wanted to reiterate that every young person has battles that they are faced with, no matter what era. In our generation we highlighted: discrimination against transgender people, period poverty, pressure to conform to extreme diet fads, toxicity on social media, slut-shaming, cat-calling, males unable to speak out about their mental health etc. We wanted to give those issues a voice.

Elise: As a storyteller I have always been drawn to exploring what the emotional impact can be for people when they face challenges or obstacles on their journey, particularly with young people. The world looks so different today and we get a sense of everyone being much more connected than ever before through technology, etc, whereas in reality most of us feel to some degree feel more disconnected from society as a result. I found I am drawn to seeing how this impacts the younger generation, growing up with screens as the ‘norm’ and how new issues have evolved from this, and I wanted to explore that further.

Why did you decide to make this film? Was it personal experience or a topic that you were interested in?

Elise: When writing the script Jess and I discussed challenges we faced as we were growing up and that certainly fed into the experiences of the characters you see on screen. However we both wanted to create a story that felt as inclusive as possible so audiences from different backgrounds and experiences could see themselves in the film.

Jess: We felt that it was important to use our platform as female filmmakers to convey these topics so that our audiences can try and understand that these are extremely prominent issues in our modern generation, and hopefully this would raise awareness of those issues. We ultimately wanted to start a conversation between not only young people but those older too and bridge the gap between the common ‘my generation’ and ‘your generation’ battle – if we can all empathise with each other’s issues and support our youth by acknowledging theirs, then I think that’s a great place to start.

What inspired the decision to make this a musical?

Elise: I think it was influenced both by our love of musicals and telling stories through music and wanting to create an engaging, challenging piece that would draw audiences in and subvert their expectations.

Jess: Not only are Elise and I huge fans of musicals but we’re aware that the musical genre can be an extremely effective way to convey emotions – by placing our characters inside a musical format which has a positive and lighthearted opening (as many do), the juxtaposition when our lyrics convey the seriousness of these characters issues hopefully has more of a powerful effect on the audience. With the characters existing in this heightened musical world, we wanted to say that even in this format, these issues cannot be sugar coated and that the youth don’t exist in an ‘easy’, ‘cushty’ world.

Jess: For musicals specifically, the craftsmanship behind Singin’ In The Rain is out of this world – one day we want to make a larger than life musical in the vein of Damien Chazelle’s La La Land, which I also loved. My all-time favourite director is Steven Spielberg. I’ve always admired his ability to portray the world and human emotion in such a fantastical way.

Elise: That’s a tough question - how long do you have? I think Jess said a lot of it so I would just add Rachel Bloom (Creator of Crazy Ex Girlfriend) for her amazing ability to tell a story in every genre of music, take audiences through every emotion and essentially ‘say it how it is’, completely unapologetically.

Jess: I think the advice I would’ve wanted to hear is that there is no set path for any individual role – if you want to direct, write or produce, you just need to go out and dive headfirst into making your short films. Your passion and persistence will be noticed, especially if your film is successful in the festival circuit! If funding isn’t easily accessible, then grab a group of close filmmaker friends and self-fund the project – some really exciting awards and festival selections that my shorts have received have been from our micro-budget, self-funded short films after Uni! You’ll learn and grow as a filmmaker an incredible amount by doing it yourself, then hopefully from there, more opportunities will arise!

Elise: Take all the help you can get! It's a tough industry so look for advice/support where you can and always be willing to grow and learn. Even if you’re not always following the exact path you expected, every experience and project teaches you and know your voice, if you’ve got something to say or a story to tell then go for it!

You should read our review of the New Creative piece ‘We Got It Easy’. 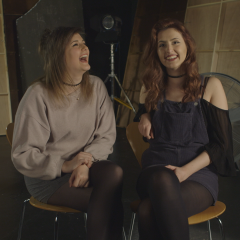 Jess and Elise explain their love of musicals, the power of juxtaposition, and offer great advice for anyone looking to enter the film industry.