Red Biscuit Theatre have created a delightful reimagining of a classic childhood story, and are taking The Very Well-Fed Caterpillar up to Edinburgh Festival Fringe.

My name’s Theo Moore, I’m an actor and theatre maker from the South Coast (near Brighton-ish) and one fifth of Red Biscuit Theatre... Who have a show in Edinburgh!!

The Very Well-Fed Caterpillar is a physical devised comedy about a caterpillar who eats too much, can’t fit into his cocoon, gets angry and subsequently takes over a village. That’s where it starts. It’s very fast paced, full of lots of silly laughs and with a bit of a moral story there too. But only a bit. It’s been described as ‘Pythonesque’ by one reviewer so we were pretty chuffed with that. We don’t have the budget for lots of set and props so we’ve ended up playing portals and chairs and doors (of different types, regular, sliding, revolving, we’ve mastered the craft) and all the weird character’s ourselves. It’s a lot of fun.

Edinburgh Fringe is a fantastic opportunity to get your name out there as an emerging company. It’s the world's largest arts fest and I think the third most ticketed event in the world so there’s plenty of chances for new people to discover and like your show (also hate it, but screw them). It’s also the most beautiful city and is full of wonderful artists with wonderful shows, a great place to have a few drinks with your heroes.

I would say the scale. We’ve done a little run at Brighton Fringe before, which is great and takes over a portion of the city, but having been to Edinburgh during the festival you can’t go anywhere without seeing something related to it. Be it a street performer, a relentlessly hard working flyer-er or a cafe covered in posters.

The first time I decided I wanted to make devised comedy was when The Sleeping Trees came to my college and performed a show they made at the University of Chichester. I was crying with laughter from start to finish and decided I wanted to do something similar. Red Biscuit all met at Chi Uni and some of us were lucky enough to be taught by the Trees in our very first module, which was amazing. I’ve been inspired by many more artists since then: Bryony Kimmings, Wil Greenway, Forced Entertainment, Ridiculusmus, Search Party and A Slightly Isolated Dog to name just a handful.

Well I’m straight out of Uni at the moment so still attempting to find my feet as an actor and theatre maker, but if I wasn’t doing that I’d try my luck as a giant foam hand vendor at sports games.

Astronaut would be pretty cool. But maybe with less responsibility for things that could go wrong. I just think it’d be neat to be in space. Or a Daschund trainer.

I played the Pharoah in my primary school production of Joseph, you could see my little white pants through my sequinned see-through once piece. I smashed the song about fat cows.

I think with the work I make outside of Red Biscuit I’m more inclined to include my world view and politics, which I suppose change all the time as I read more and events occur. There’s plenty of social issues I’m inspired to make work about at the moment but I don’t think I feel it as pressure in a negative sense, rather than as something I strive to do as an artist. Red Biscuit’s other show, Little Town Blue, is a left wing commentary on neoliberalism in America, which sounds pretty heavy but we loved researching for it as we all felt passionate about its purpose. It was still a comedy though and we didn’t feel pressured to adapt our style to fit a more serious subject.

In some ways, for sure. We do enjoy poking fun at current events and contemporary pop culture; calling out things we think are absurd about the real world as well as within the ones we create, and this changes and updates all the time. Having said that I think the good thing about going to fringe’s is that you see shows that represent a spectrum of public opinion so you don’t have to make your work fit in with a rigid classification of what is considered popular at the time.

Also, our work is quite universal, it’s silly and fun for everyone involved including the performers and I hope that our artistic ambitions can be directed by our own interests rather than that of external influences.

I guess I should say I’m already working with them. But I won’t. Sorry boys. I’d like to work with Louis Armstrong. I don’t know what we’d do together but he was so cool.

Why would a performer opt to do either a ticketed event or participate in the free fringe?

We decided to go for a ticketed event as we feel we’ve established ourselves a little over the last couple of years and need to be getting paid if we want to pursue this as a career. Not that people who do the free fringe can’t be career driven or can’t get paid, I’ve seen a lot of amazing shows on the free fringe that can gain more money from the donations at the end than a ticketed show could from their box office split. I guess one potential reason you’d go for that is if you think you didn’t have the facilities to drum up enough paying audience members, which is very difficult for new companies who can’t afford publicists or numerous flyer-ers (like us! See our show! Please!).

What are the benefits and limitations of both?

This is my first time performing at the fringe so I’m no expert. I’ve only ever been up to watch and enjoy so don’t take my word for gospel. I think that If you’re paying for a big venue there are a lot that squeeze money out of their artists (as well as recent revelations involving how poorly they pay their non-creative staff members). Making them pay for the seats they don’t fill which, in a festival with so much to choose from at every hour of every day, seems deathly unfair on non-established acts.

The dichotomy of a festival that is so unique for artist exposure but conversely can lead to dire financial consequences for the upcoming is difficult to balance. I remember last year I saw a show on a bus at midnight and the guy hosting it went on a very long rant about the venues that push unfair deals on small companies, who either don’t know better or are willing to take the gamble, it was late and I’d had a few beers but the sentiment stuck with me. If you’re doing free fringe you get to take home all of the donations, and it is exceedingly cheaper than signing up with a bigger venue, but of course there is less exposure. So less risk of financial ruin but less hope of a huge award-winning run.

That last answer sounded a bit morose. So make sure you have fun up there. Budget correctly and it is manageable and amazing, you’ll make wonderful contacts for future collaborations, drink into the wee hours with amazing artists and friends, and maybe get those sold out shows we all dream of. The most important thing is to make sure the show’s good. Try and get as much feedback as possible but make sure you, yourself love the show and are confident in its content so you’re not completely devastated if someone else isn’t convinced. Apart from that be organised, try and raise some money because the fringe is notoriously expensive for us small companies and remember to take breaks and have fun when you’re up there because it gets hectic.

Read our 2018 review of The Very Well-Fed Caterpillar at Brighton Fringe here. 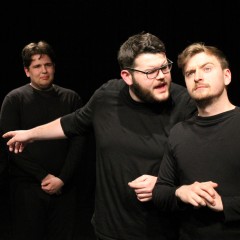 Red Biscuit Theatre have created a delightful reimagining of a classic childhood story, and are taking The Very Well-Fed Caterpillar up to Edinburgh Festival Fringe.