Prepare to see your favourite childhood story be twisted, warped, and dare I say... improved?

We all know the story. There once was a very hungry caterpillar, who ate and ate and ate. With an enviable metabolism, and miraculously avoiding diabetes, he consumed a supreme feast for a creature of his size, before turning into a beautiful butterfly (spoilers).

But what if he didn't undergo metamorphosis, and instead simply continued to grow, turn carnivorous, overthrow a kingdom and become a tyrant? A serious question, I know, but one that Red Biscuit Theatre Company endeavour to answer.

With excess energy, a genius yet childlike creativity, and a surprising amount of heart, the all male theatre group bring this horrible hypothetical to life, truly embodying the world they sought to create. No, really. They had no props, so took on the form of the chairs, tables, doors, elevators, clocks, and even the pulsating purple portal.

The story very quickly diverges from what you know, but that's not a detriment. The troupe of Red Biscuit produce something unique that could rival the original, filled with its own moral dilemma and story of both redemption and love. We learn a lesson about greed, witness the harrowing reality of group planning, and discover that it's important to be true to yourself. Or rather, you do if you're really looking for it, and not just trying to catch your breath from laughing.

It was not without flaws though. Some gags fell flat, although often they were incredibly cheap anyway, and probably could have been cut without much issue. Similarly there was one particular section that didn't quite make sense, but again it was a minor point that didn't hugely detract, not least because we were quickly blasting on to the next scene.There were also a few times where a line that had the potential to be a hilarious failed to make the impact it perhaps deserved because of a botched delivery. A little bit more work on timing and this could be an incredibly polished piece.

The Very Well Fed Caterpillar is demonstration of just what can be achieved without props, but an abundance of imagination. Theatre doesn't need elaborate sets, sometimes a bloody good script and buckets of enthusiasm is enough. That being said, when these guys get bigger – and they certainly are going to – they might want to experiment with implementing some costume changes or light props. However, I would only recommend they do this to enhance, not replace the fantastic world-building they already achieve.

Well executed, zany, and energetic, The Very Well Fed Caterpillar is a truly silly piece of theatre, and I think Red Biscuit Theatre have a bright future ahead of them! 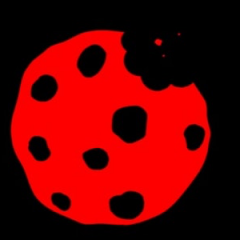 Prepare to see your favourite childhood story be twisted, warped, and dare I say... improved?