"We’ve since taken the show to Guildford and London where I interviewed more people from those areas to make the show more location specific. It’s important that the show is as relatable as possible to really hammer home how entrenched this issue is in society."

Hi! I’m Maddie Ross, Creator of Coming Home With Me. This is my first professional project.

The play follows three girls on a night out. The play is created using verbatim testimony (which means it’s entirely made up of what real people have said). I interviewed a cross section of woman about their experiences in UK night clubs, then chatted to bouncers and leading charity experts. I also took extracts from newspaper articles, statistics and parliament discussion to weave the story together. We explore the different levels of harassment that affects nearly every woman when they go on a night out. It’s not all doom and gloom though – I wanted to make the subject as entertaining as possible to open up a dialogue and break the stigma surrounding it.

What made you decide to write about the topic? And what was the process for creating the piece?

I first had the idea for the play when I was working at Edinburgh Fringe last year. A man would not leave me alone on a night out and kept insisting I was “coming home with (him)”. I had seen a lot of feminist theatre during fringe and was feeling empowered and inspired, the idea just snowballed from there and a lot of people have been interested in sharing their stories. I initially interviewed students from Sussex University (which is near where I live, Brighton) then that escalated to collaborating with charities (namely Good Night Out and Survivors Network), after that I got the chance to interview a bouncer from a night club and others who worked in bars and clubs in the city.

We’ve since taken the show to Guildford and London where I interviewed more people from those areas to make the show more location specific. It’s important that the show is as relatable as possible to really hammer home how entrenched this issue is in society. We have also added stories from Edinburgh since!

I really wanted to write a show about this topic because a lot of girls I spoke to about it felt they didn’t know what to do when being harassed on a night out; this didn’t sit well with me. The show aims to empower the people watching it, whilst also educating people on the behavior that makes harassment commonplace on a night out.

I’ve worked at the fringe for three years on the front of house side and always loved the atmosphere that the festival has. I also think there is a really amazing female community at Edinburgh Fringe which is such an amazing thing to be a part of. I’m feeling very in touch with a lot of other female-led theatre makers which is harder outside of a fringe environment. Overall, we just can’t wait to take the show up to Edinburgh as the audiences are so diverse – the show really is for everyone and we want as big a cross-section of people to see it as possible.

I think the sheer size of Edinburgh Fringe means that it is a completely different beast. To be a part of something so large and so important in the art/theatre calendar is truly exciting. Additionally, I feel that Edinburgh audiences are far chattier with performers than in other places so to get some honest feedback on the show will be brilliant!

You previously performed the show at Brighton Fringe. How was the show received there?

We felt so nurtured at Brighton Fringe. We were lucky enough to win the Brighton Fringe Pebble Trust Award, which meant the show felt endorsed from early on, which definitely helped with getting our new name out there! We sold out most nights, which was definitely unexpected but so exciting – our most common feedback from audiences was how relatable the production was and how it opened up a can of worms on a topic that just doesn’t get discussed that often. After a five-star review from Voice as well, we were feeling very happy with the show post-Brighton.

Have you made any changes to the show between festivals?

Lots of changes! We asked for a lot of feedback post-Brighton and really edited it and changed the show so that we were representing everyone’s voices correctly. We didn’t want anyone to feel left out of the narrative. Our cast and creative team is made up of very strong females so it was important to sit back and think about those voices that aren’t quite as comfortable voicing their opinions. After our show in Guildford a couple of weeks ago we feel the shows tone is now in a really good place and that the verbatim material is being represented with the most respect we can give it.

I studied drama and theatre studies and have always been certain I wanted to create theatre. I love the temporariness of theatre and how each night and audience can alter how a show is received. I’m also completely obsessed with making truthful work, so obviously, verbatim was a logical genre choice. I am very inspired by cardboard citizens who make really important theatre about people on the outskirts of society – the way they stylize their productions to be engaging and thought provoking, whilst still entertaining always bewildered and excited me. In the last few years Bryony Kimmings and the HOTTER project also stand out as really inspiring work for me.

I’ve always loved the idea of being a professional dog walker! Not quite linked but I imagine it would be a lot more relaxing than creating a fringe show – maybe something to consider for retirement.

Doing exactly what I’m doing now! I feel my most fulfilled when creating theatre and telling other people’s stories.

I really vividly remember being in my Dad’s living room which had an archway with a curtain in it (90’s décor was quite something). Me and my sister used to make up small plays (the curtain often had a large part to play) and perform to our family for hours on end, probably incredibly annoying looking back but we definitely had a good time!

I definitely found that with this production, but if I was to stay on top of all of the different reports of harassment in club spaces the play would need to change on a near weekly basis. I think I had to accept that not everyone’s story could be included in the show, but that’s ok. We have created a very broad conversation so if there was a story which I felt really opened up something that we hadn’t already discussed then I would add it in.

I think in the wake of the #metoo movement the conversation around harassment has been opening up more and more but the statistics on women being harassed and assaulted in public spaces is actually on the rise. I think it might be a case of whether the right conversation is being had. I think that we are getting there and there has been a shift in how womxn are treated in night club spaces but we are nowhere near the end.

I would love to work with Gob Squad as I find their staging and dealing with their personal experiences on stage fascinating. The chance to work with a company with such a strong devising method would be wildly exciting.

There are definitely benefits to both. I think the free fringe is a brilliant gateway into the world of fringe for those without the financial means to pay the HUGE (and I mean huge) venue fees. For me, I have picked up as much extra work to fund my fringe this year, obviously this will not be viable forever. There is also something to be said for ticketing your work – performers have worked endlessly hard on their shows and this should come at a price. I feel like there really is no right way to fringe, however, and it’s important to do whatever works best for the performer.

Be ready for sleepless nights, a lot of stress (refreshing that sales screen has become a recurring nightmare for me) but also some of the most fun and exciting times of your life.

We are @girlcodetheatre on everything! 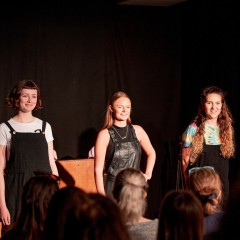 Interview with Maddie Ross, creator of Coming Home With Me

"We’ve since taken the show to Guildford and London where I interviewed more people from those areas to make the show more location specific. It’s important that the show is as relatable as possible to really hammer home how entrenched this issue is in society."