"For any one of your opinions to hold value, it has to come from a place of genuinely wanting to say something and not some perceived sense of responsibility or a desire to have the simultaneously most viral and woke take."

I am a New Zealand stand up comedian, improviser and I host a podcast called the Worst Idea of All Time where my friend and I watch and review the same movie every week for a year. I am also taller than you imagine and much funnier than represented here.

It is a stand up comedy show featuring some of my best jokes from the past eight years baked into a reflection of my journey to be the person I am today. It is a perfectly balanced show and I have already been awarded the Edinburgh Comedy Award for it, in spite of not being eligible.

Because I hate money!

The size and the history. Growing up in New Zealand to even take a show to the Edinburgh Fringe was the gold standard of success as a comedian. Financial implications be damned, if you did it and came back to New Zealand and said "I've just done the fringe" everyone would look at you like a battle hardened Olympian. While the internet has diluted that somewhat, the prestige remains. It's the biggest comedy event in the world, why wouldn't you want to be a part of it?

I was very funny in conversation with friends and I wanted to see if I could replicate that on a stage in front of strangers.

I would be teaching English and trying to be funnier than my pupils. It would be a disaster.

I feel very grateful to be able to say I'm doing it! Everything would remain exactly the same only the person reading this interview would have already bought a ticket to my show.

I was the best at drawing until J2 (six years old) when a boy named Oscar Enberg came into my class and was immediately, obviously so much better than me. I was furious and swore he would be my lifelong enemy. We were best friends within two days.

If you spend enough time online it is hard not to. I think I was much more susceptible to adjusting my opinions and jokes to suit cultural trends even three or four years ago but the older I get, the more secure I become. For any one of your opinions to hold value, it has to come from a place of genuinely wanting to say something and not some perceived sense of responsibility or a desire to have the simultaneously most viral and woke take.

Absolutely! It is a marriage (as comedy always is) between what I think is funny and what an audience will find funny. I am living in the same time as my audience and so there will always be an element of my work reflecting their sentiment.

I am thirty and untethered.

A ticketed event has more prestige attached to it (whatever that is worth, I am anticipating about -£5,000) and there is a higher likelihood that Tories who come to the Fringe every year will discover you. The Free Fringe makes a lot more financial sense but especially as a new act, it is harder to quality control your room and performance conditions.

8:55PM at Assembly George Square! You can also see me doing improv with my friends every night at 11PM at the Pleasance Courtyard.

You can email me [email protected] if you want to write an email but don't yet have a recipient in mind. Or if that seems too intimate you can follow me on Twitter and Instagram @guy_mont

See Guy Montgomery: I Was Part Of The Problem Before We Were Talking About It at the Assembly throughout the Edinburgh Festival Fringe from 31st July to 25th August 2019. For tickets visit www.edfringe.com 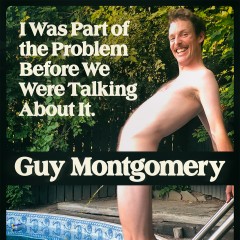 "For any one of your opinions to hold value, it has to come from a place of genuinely wanting to say something and not some perceived sense of responsibility or a desire to have the simultaneously most viral and woke take."