"We have a really annoying conservative minister in New Zealand who often is saying really frustrating things publicly, and that will always inspire me to create something quite gay in response."

My name is Chris Parker, I’m that "tall, blonde, gay comedian from New Zealand, with the big hands." I'm doing my award-winning comedy show Camp Binch in Edinburgh. It's my first Edinburgh, so please be nice.

It's like a gay coming of age biopic of my own life and I get to play the lead role. I go through specific memories of me trying to fit in during school in New Zealand, and my not so successful attempts to blend in with the "straight boys"

I want to make 1 million dollars. No, in all seriousness it’s like a rite of passage for any young comedian. Any time I go to a family function some distant aunty will ask me if “I’ve ever been to the Edinburgh Fringe” So I’m glad to be able to finally shut those conversations down.

Geographically it’s in Scotland. I imagine you will get a few more Scottish accents than other festivals.

I’ve always been a giant show off, and am looking for any opportunity to be in front of people, this just felt like the next best step. I’m always looking for a way to monetise my worst habits.

Honestly, I’m doing it. So, I’m going to say Accountant, because I feel like it never gets picked for questions like these. So, Accountants, this is for you xx

I was 4 years old and saw a high school production of The Wizard of Oz. My entire memory is in black and white and I remember the witch melting into a pot for some reason. Later when I studied at Drama School in New Zealand I met an actress who was a bit older than me WHO WAS IN THAT PRODUCTION!

I like to be up to date on current events and I always like to use my voice to help raise awareness for those whose voices aren’t as loud as mine so in those instances I will sometimes pipe up online.

Honestly, it’s all kind of swings and roundabout at the moment, sometimes it feels like we are taking huge leaps forward in terms of shifting societies perceptions of the LGBTQIA community and then sometimes it feels like we are taking 10 steps back. We have a really annoying conservative minister in New Zealand who often is saying really frustrating things publicly, and that will always inspire me to create something quite gay in response. I guess when I feel like it’s a good time to be gay my work defiantly is a little less “angry” lol. God I don’t know this was a hard question

I would like to be in some kind of weird cabaret show where I sit on a big couch and watch Patti LuPone sing all my favourite show tunes and then Dolly Parton comes out for a big show stopping finale.

I have absolutely know idea, I think you lose less money in the Free Fringe – less overhead costs. I think lots of people opt to do it for their first fringe experience. Oh god… maybe I should have done that.

Well speaking from the experience of someone who has never been, I’d say save money, find a producer and lower your expectation so that every experience surpasses your expectations of what was possible. That’s all the advice that was given to me. 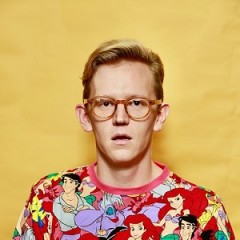 "We have a really annoying conservative minister in New Zealand who often is saying really frustrating things publicly, and that will always inspire me to create something quite gay in response."