Canadian comedian Tom Stade talks about his foray into acting

Can you introduce yourself for the reader?
No, I refuse to introduce myself and this is my type of comedy.

Why did you first enter comedy?
Because I realised at a very early age, I needed an art form that would maintain my high school lifestyle forever.

What brought you to the UK comedy circuit?
I came over here because it was way better paying than the frozen hillbilly land I’m from.

What (if anything) is special about Edinburgh Festival Fringe?
It lasts a long time and its the biggest in the world, that’s what’s special about it - Duh!

Why did you decide to release I Swear for free on YouTube?
The reason I released it for free was because I like to give something back to my true fans for all the times they’ve come to see me over the years. I’m a man of the people!

Does the decision to upload it run contrary to the content of your new show, I Swear To…?
Yes.

You’ve recently made the move into acting, and now feature in The Grey Area. Can you tell us about the show?
The show’s about inner city Scottish life and it’s a show that shines the spotlight on a depressed culture in a bad area of town. But it’s all real and written by people who’ve lived it. That’s why I love it!

How did the opportunity came about?
Because I’m an awesome actor, what do you think?

What are the differences and similarities between acting and stand-up?
Well one, you have a script and there’s other people saying things to you and in the other one you’re just talking!

What has been the highlight of your career to date?
When you’re as good as I am, there are too many highlights to count.

Have you ever had a job outside of the comedy industry?
When I was 17, I used to make industrial buckets of salad cream and thousand island dressing and we shipped them off in ferries. I also tree planted for two seasons in British Columbia trying to save the planet. I’ve given up now!

Do you think Brexit is going to have an impact on touring artists?
Of course if they wanna leave the country, it will totally affect them. Getting stopped at the boarder all the time always effects a touring artist.

What advice would you give to someone wanting to follow in your footsteps?
Pick the right role model: somebody that’s not perfect.

Where can people go to find out more about you?
We live in the year 2019, it’s not like I’m hard to find. Type, “Tom Stade,” into Google and that should start your journey! 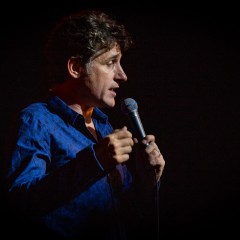 Canadian comedian Tom Stade talks about his foray into acting