Before Sleeper played to the O2 Forum this weekend I sat down with bassist, Kieron Pepper for a chat about all things Brit-Pop, touring and life as a musician!

In case you hadn’t heard of them, Sleeper were one of the biggest bands of the 90’s with several top 10 singles and countless albums earning Gold and Platinum status alike before they all decided to take a break... but now they’re back with a bang!

As soon as I heard they were playing the O2 Forum at Kentish Town I had to get down there. Sleeper's new bassist Kieron Pepper was kind enough to sit down for an interview.

How did you all meet and get back together as a band after taking a break for so long?

Despite desperately wanting to be, I wasn’t an original member. I was a huge fan of the band back in the day (actually went to see the band at the Cambridge Corn Exchange back in ‘95) and it was only when I was working with John and Andy at BIMM in Brighton, that I joked about joining the band.

With John I’d always say that ‘if you ever got Sleeper back together again… I’d love to play second guitar or something’, rather disappointingly he’d always tell me ‘that’s never ever gonna happen’. After taking a break John would chat with Lou about getting the gang back together and she’d say no or vice versa, until Lou decided that life’s short and that they’d probably regret not reforming.

Now this is where I came in! Their original bass player had parted company when the band was still going, I think they were originally gonna look at the last bass player they had, but they said to me ‘you wanna play bass?’

Of course I was ecstatic but I asked about the band’s original bassist, I’d thought they would have asked him since it would've been amazing to have the original line up from the 90’s. Unfortunately logistics didn’t quite line up for rehearsals so I ended up filling that role and things just sort of started rolling from there...

It was a real buzz to get to play some of these amazing and intricate bass lines, a bit of a work out as well though! We got in a rehearsal studio and it all just clicked and away we went…

What inspired you to write ‘look at me now’, the lead single of you latest album?

Most of the songs are written by Lou and Andy, they’re so creative and Lou has so many stories that she wants to tell - it’s something I really admire. For me the track’s a little bit about a self reflective process, not just for Lou and us but also our fans as a whole generation.

It’s a bit of a reflection about taking yourself too seriously, or not enough or even both! I actually think there’s a lot of elements in it that could be left open to interpretation no matter your age and that’s what I personally really like about it, how universal a song it is!

What’s been your favourite thing about being in the studio with the band and recording new material together?

For me personally, being in the studio with your friends is just so much fun, it really doesn’t get any better! There can be a lot of high tension with working out different parts but any differences get resolved so quickly with the bunch of us, so it was just really fun to be honest.

My main buzz was being in the studio with Stephen Street, who’s an absolute hero for me, having worked on so many records I grew up listening to. I always really admired his production style and he’s such a lovely guy, the way he works is quite old school which is such a breath of fresh air compared to emerging styles with newer producers - it helps make me feel a bit nostalgic!

What was the first album you ever bought?

My first album... hmm... well, actually, it was two together at the same time, and they were ‘Best of Blondie’ and ‘Prince Charming’ (Adam and the Ants). Putting it like that I sound like such an 80’s kid through and through haha!

What’s been the most fun about being on the road again and how much were you all looking forward to it?

All the shows on this tour are super different in size but every night has been pretty magical. Of course being on stage with your friends is always going to be a laugh and there are these really special moments when we’ll all catch each other’s eyes on stage and you’ll be like ‘is this really happening?’ But then for the three original members, I suppose it must be like ‘this feels like it did 20-odd years ago!’

Even seeing old friends in the crowd has been so enjoyable. So for example, last night we were playing in Bristol and there was this one guy in the middle of the crowd jumping up and down and really going for it. He was wearing a white t-shirt so he really stood out anyway and then I’m looking at his face thinking ‘I know this guy?!?’ Then once the show was over and people were filtering out, I went out the front and just shouted out his name and he turned round and it was this guy I was really tight with in a band when I was 16/17! Moments like that are what the whole Sleeper thing’s been about.

If you could collaborate with any other artist, who would you pick and why?

That’s such a hard question for me OMG! If there’d be any collaboration with people like Johnny Marr or people from the Brit-Pop era that Lou would really enjoy working with, that would be super super cool!

What have you been getting up to in your time away from touring with Sleeper?

Well I’ve been working at ACM as head of their Artist Development and Creative Output team, helping to develop artists there which has been super rewarding. Alongside that I’ve been fulfilling all my dad duties with two older kids and now an 18-month-old baby so I’ve definitely had my hands full!

Finally is there anything exciting that you’ve got hidden up your sleeve for the rest of the year?

Sleeper wise we‘re playing a few festivals over the summer including the Kew Gardens show that’s coming up and we’re all just really excited for those. But we need to chat about when we’re gonna write some new stuff so keep your ears peeled for news about that.... 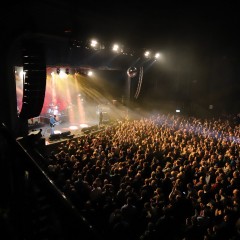 Before Sleeper played to the O2 Forum this weekend I sat down with bassist, Kieron Pepper for a chat about all things Brit-Pop, touring and life as a musician!