‘Music is great for communication,’ says Shah, ‘but it’s also a great way of demonstrating understanding between different cultures.’

From his upbringing in Oldham to performing at Buckingham Palace, Faz Shah admits he leads somewhat of a double life. An actor, composer, writer and beatboxing violinist, Shah talks about his run-in with the Royals in the same breath as Hip Hop, Grime and Skepta.

Combining Eastern and Western melodies and styles, Shah’s music draws from a variety of genres to create tracks like Summer Ice, which fuse contrasting elements as part of his signature sound. As the track’s title suggests, his wide-ranging body of work takes the temperature of seemingly divergent lifestyles and cultures. Turkish saz and bağlama sounds integrate with dance rhythms. Electronic styles merge to form Arabic Pop.

Speaking from his home in Manchester, Shah talks us through his latest theatre project, collaborating with refugees within the classroom, and his belief in music’s ability to bridge cultural divides.

Yeah, good. I’ve just been in the office. I work with Dad every now and again. We’ve got a family business, you see.

Still a proper Oldham boy at heart then?

So, give us some background. Where does the classical music come in?

I started on classical music, with the violin. That’s what I’m trained in. When I left Leeds College of Music, I had to make a decision. Do I want be a classical player or am I going to pursue my interest in other genres? So, I proceeded to teach myself to play in an Indian style, an Arabic style – a bit of Jazz, and Contemporary as well.

From there, I started doing string-quartet, classical weddings. Then I moved to solo, electric violin and Bollywood weddings. Now I’m writing my own show for next year.

It’s a one man show. Basically, it tells the story of a guy who doesn’t speak, until the last two minutes of the show. It starts with him waking up in the morning, up to when he goes to bed at night. The whole show is about him finding his voice.

What can we expect from the production?

Some of it is what you’d call choreographed pedestrian movement. So that’s where he’s brushing his teeth, syncing the movement to the pre-recorded sounds. It incorporates music, but the synergy is unique. It’s got a bit of clowning in there, it’s got mime, it's got live instrumentation.

Do we have a working title that?

No, it’s still in the works. Nobody knows about this; I’m telling you.

Speaking of finding one’s voice through music, your work with Music International is all about giving voice to marginalised groups. Can you tell us about Harmonise?

For the past two years, I’ve been coordinating Music Action International’s Harmonise project in the Manchester area. I head teams of four into schools to teach the students what it means to be a refugee. We have a refugee in the room and they share their story.

Some of its hard to hear, especially when you’ve grown a rapport with the refugee. By the end of it, after their story has been told, we create original songs in response to that story, and then we play it to the public.

What makes music so well placed to communicate these stories?

Music is great for communication, but it’s also a great way of demonstrating understanding between different people. We’re able to build bridges within the classroom. Communicating with the refugee, a lot of music and lyrics encapsulate language, culture and experience. We talk about that all the time.

The songs we learn are very traditional folk songs. We do songs in Swahili, in Bosnian, in Roman, different languages from around the world. Some of the schools we’ve been going to, in one class of thirty-two students, we have twenty languages. That’s only in one class, and that’s common within inner-city schools. Teachers are not equipped to deal with that sort of environment.

How do students react during these sessions?

You’ll hear, ‘My parents said that Romanians are not welcome.’ And you’ll have a Romanian kid sat next to them and they’ll say, ‘Oh, really? I didn’t know that.’ The Romanian kid will feel defensive. But when we talk about Romania, and we learn a song in Romanian, the class sentiment is totally different. They start to understand. ‘Oh, that’s such a cool song. I didn’t know what that meant.’ ‘We’ve got a Romanian in the class, that’s so cool’

Bridging divides between cultures is becoming increasingly important, given the current state of politics.

Yeah, it’s very political. We have to remind ourselves that kids also know there are borders, that there are boundaries. You can’t go there, you can’t go there. You’ve got that identity there, that identity there. What differentiates them? There was a war that happened about 300 years ago separating their countries. It’s historical, it’s political. You don’t hide it from the kids.

What was your experience with music at school and growing up?

I was a violinist, already into Hip-Hop, Grime, Skepta, when all these lot were hitting the mainstream. YouTube was just starting. The beatboxing came in when I was about thirteen. I was doing a music project in Manchester. I didn’t really hear about beatboxing until I did this music project.

I was totally blown away. I never thought you could make them sounds with your mouth. It sounded like a drum, a proper a drum – things that you would go to raves and listen to – and it was coming out of your mouth!

How did beatboxing influence you from then on?

It’s important to put into context, because I think I had a bit of a need for it. I wasn’t having a good time at school, for many different reasons. Mainly because the climate that we were was during the aftermath of the 2001 riots. A lot of us remember the racist friction within the community.

I was in one of the older schools in the area, where Pakistani, Bangladeshi and White English kids all go together. Every lunchtime there was always problems. We’d look over our shoulders and check who’s around. Because I’m mixed race, that didn’t go down well either: ‘Are you with them or you with us? You have to pick a side.’

Plus, the fact that I played classical violin, it just didn’t resonate at all. [Laughs] I didn’t do myself any favours to be honest.

There were a couple of organisations that put my name forward for the Buckingham Palace. They said, ‘He’s made enough of an impression in the surrounding area.’ At the same time, I think you are right. I’d never really thought of it that way, of having opposites that are coming together; because the violin came into my life at a time when I needed it, and so did the beat-boxing.

It was more that I was using these tools as a means of communication growing up. I wasn’t particularly bright, and I wasn’t really outstanding in that respect. But with music, especially with the theatre and the drama, I was quite good at it. So, I let that lead the way. The polar opposite training that I adopted for myself resonated with a lot of the organisations I was working with.

My house is full of opposites. I’ve got a parent from one culture and a parent from another culture. It’s not abnormal for me. Only when I steep outside the front door do people tell me how abnormal it is.

You have a talent for finding common ground. It comes across in your music.

You can’t take your circumstances out of context from your achievements. I have had polar opposite experiences, I would say that’s true. I guess if you were to say I’ve got a trait, it wouldn’t be musical talent, or anything like that. If I was to put my talent down to something real, it probably would be not lying to myself. If I like something, I will go and do it – and that’s a talent I’ve always had.

The music may be a talent. But the skill itself, like playing the violin, is a skill like anything. If you practise a certain number of hours a day, you get to a certain level. The challenge is what you do with it. That’s really where the talent is.

Faz Shah is a keynote speaker at Music Mark’s 2018 conference and will be performing on 22 November, sponsored by Trinity College London.

Click here for the programme and make sure to read our open letter on the subject of Youth Voice. 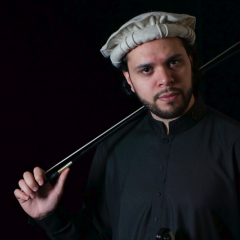 ‘Music is great for communication,’ says Shah, ‘but it’s also a great way of demonstrating understanding between different cultures.’