Voice MagInterviewsInterview with The Q…

Taking us though the ‘risky as hell’ process of staging an original production, Hannah Elsy gives us the lowdown on the new Original Cast Recording

Grown from a student production into a fully-fledged Off West End Musical, The Quentin Dentin Show has become a cult favourite amongst theatre-goers. Following the release of the Original Cast Recording, producer Hannah Elsy pulls back the curtain on the latest soundtrack and gives us the lowdown on what it takes to produce an original rock-pop musical.

Quentin Edwin Dentin. Who is he, where did he come from, and what’s his show all about?

Quentin Edwin Dentin is a supernatural motivational speaker who appears, genie-like, from your household radio, whenever your life needs fixing. He drops truths about why your life is not on track, accompanied by a live rock band and a chorus of dancing minions. He’s the medicine we ‘snowflakes’ need. The Quentin Dentin Show is about one of his visits to earth.

A rock musical about a supernatural motivational speaker with dancing minions. Whose idea was that?

The idea came about when myself and a group of friends – including the show’s writer/composer Henry Carpenter – were talking about making a show with two dysfunctional characters, who would then be ‘fixed’ by a third, perfect character. Henry was writing songs for a musical adaptation of Measure for Measure, [which] we were both working on as students at the time, and thus The Quentin Dentin Show became a musical.

What's been like putting on an original production? Talk us through your role.

I have been producing The Quentin Dentin Show for four years. As the producer, I have grown the show from a £100 student production, playing at The Rag Factory off Brick Lane, to a full two-act Off West End Musical (and now cast album), which has played at the Arts Theatre and the Tristan Bates Theatre.

It’s extremely rewarding putting on an original production, because you know the show you have created has never been done before.

I secured the venue for one of the performances before the redraft for that venue was written, and then encouraged the creative team to create a product for that venue. Risky as hell in retrospect, but it pushed everyone, Henry included, to create brilliant new material for each iteration of the production.

And now there’s an original cast recording! What can you tell us about it?

The Original Cast Album has immortalised The Quentin Dentin Show. The album is based on the 2017 Tristan Bates Theatre Off West End Production, but the album’s producer, Paul Garred, has worked with the songs to give them a great modern-pop feel. The album is well worth buying if you’ve seen The Quentin Dentin Show – or even if you’ve never heard of it.

The recording process was a learning curve for me, as I hadn’t released a music album before. There was a lot of contractual and administrative elements to releasing an album which simply don’t exist in live theatre production.

What can audiences expect from the album?

The lyrics are witty, the beats are sick, and the album introduces you to the world of this wonderful character. You’ll be laughing and dancing at the same time. I’ve been listening to it on repeat in the gym.

‘Lemons’ is one of my favourite tracks. When life gives you lemons what do you do? What’s your ethos?

Work through the difficulty, take some exercise, and phone my Mum.

Critics have called it ‘The Rocky Horror Show for the new Millennium’. That’s quite something.

Rocky Horror was less of an influence on The Quentin Dentin Show than the critics like to make out. We didn’t set out to make Rocky Horror 2.0. Far more prominent is the live stage work of David Bowie (for Quentin) and his character in the film Absolute Beginners, the stage work of Devo and the music of Elvis Costello.

Audiences love The Quentin Dentin Show. They love Quentin and his catchy songs, his surreal world and his motivational speaking. We’ve had audience members come back to see multiple iterations of the show. Certain dedicated audience members have now become part of the production, helping me with fundraising and writing blogs about the show.

What’s next for Quentin Dentin and Hannah Elsy Productions?

I can’t say right now what’s next for Quentin Dentin.

A TV show? A sequel? The world? 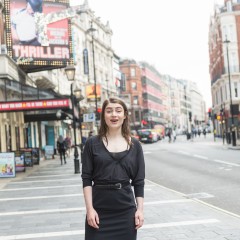 Taking us though the ‘risky as hell’ process of staging an original production, Hannah Elsy gives us the lowdown on the new Original Cast Recording