Magician Ben Hanlin takes some time to talk to Voice about the show, inspirations, and to give advice to young people.

Could you first introduce yourself to the reader?
I’m Ben Hanlin - I’m a magician that is best known for my TV show “Tricked” on ITV2 and other TV performances such as Celebrity Juice and Live at The Palladium.

Tell us about your show?
50 is a show where I perform fifty great magic tricks in fifty minutes!! I’m really excited about it because I get to take on a huge range of magic and put it all together in one show!

Why do you want to perform at Edinburgh Festival Fringe, and is it different from other festivals?
For me, Edinburgh was the obvious choice for debuting this show, because I get to work in a lovely venue for an entire month and improve the show every night. The audiences in Edinburgh are fantastic and really appreciate variety which is great for a show that isn’t pure comedy.

What first motivated you to enter the industry? Who were your inspirations?
In the late 90s David Blaine changed my life! I saw him on TV performing street magic in jeans and a t-shirt and thought it was the coolest thing I’d ever seen. I picked up a deck of cards and started learning basic card tricks. It went from there….

Do you ever feel any pressure to be a social commentator, or constantly update material to respond to events?
Unlike comedy - magic doesn’t suffer the same pressure of having to being completely current however it is very similar to comedy in the way that they both succeed due to the element of surprise. This means I’m constantly having to change my act to show audiences magic they’ve not seen before.

Equally, do you feel there has been a shift in public sentiment that has affected your work?
In the last few years magic has gotten so much more popular. A big factor of this is that there have been some good magicians on TV like Dynamo, Derren Brown, and even the quality on BGT has massively improved. That has exposed magic to the masses which has positively affected the size of audiences.

What advice would you give to someone who wants to take a show up to the fringe?
Be really clear why you want to go up to The Fringe. What do you want from the show? - For example, for my first Edinburgh show I was really clear with myself that I wanted to work in some great material that I could then break down and use for shorter slots after Edinburgh.

And what advice do you wish you’d been given when entering the industry?
Change my name! I joke about this all the time, no one gets my surname right - I get Hamlin, Handling, Lambhands - I should have changed my name so it would be easier to remember - my moms maiden name is Zindani! It even sounds like a magician’s name… I’m an idiot!

When and where can people see your show?
King Dome, The Pleasance, 1st-27th August (except 13th), at 7pm 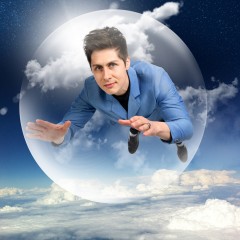 Magician Ben Hanlin takes some time to talk to Voice about the show, inspirations, and to give advice to young people.