Voice MagInterviewsInterview with The R…

The Raymond and Mr Timpkins Revue speak to Voice about Edinburgh Fringe, their show, and offer advice on the industry

Good day to you. We are The Raymond and Mr Timpkins Revue, a musical, prop based comedy act with a style very much based on velvet, sandals with socks and extraordinary, sudden violence.

It is a comic tour de force, taking in tragedy, personal loss and high art with a scatological edge but farting too. Mr Timpkins is shown the error of his awful ways in a Dickensian flashback style by a disembodied voice over and we all learn that it’s nicer to be nice.

We have always avoided Edinburgh, It seems to be largely a way of separating skint but optimistic performers from their hard earned. However, we have always had an hour show in mind and the very lovely Brett Vincent offered to take us up, using his inestimable experience and skills to make it as painless as possible.

We have no idea what other festivals are like. We don’t really know what Edinburgh is like having only ever been there for a couple of weekends but I imagine it is much more cobbly and damp than the others…?

We were in a band together in the eighties/nineties and that eventually fizzled out to leave just us together. The band had a lot of messing about between songs and our initial sets were based on that material.

We were inspired to be silly and show off largely. The people making any money from showbiz were in those days impossibly far away from anything we knew. Making a living from it seemed very unlikely at that time.

Growing up, we both loved daft comedy, The Goons, Spike Miligan, Monty Python, The Young Ones and later, Reeves and Mortimer but we also grew up with Benny Hill, Dick Emery, On the Buses, Carry On films, Morecambe and Wise, the Two Ronnies, Wacky Races and Catch the Pigeon. Bits of all of that are in the mix somewhere.

Not really. We have a couple of gags that can be changed to reflect the latest awful person in the news but largely we don’t involve ourselves in satire.

Has there been a change in public sentiment or are people just happier to show their unpleasant underneath bits in public nowadays? We don’t really leave any space in our club set for the audience to express an opinion. That approach was informed by coming up through the sadly lamented Jongleurs circuit. The audiences often needed to be brow beaten into not eating and drinking and actually forced to laugh. It was a sometimes brutal but often very satisfying way to support yourself whilst you learned about making people laugh.

Impress Brett Vincent. Accept his incredible offer. Don’t question his ambition. Get his brother Andre to direct your show and obviously get Mel Brown to do your PR.

The best advice we were given came from Joe Norris at Off the Kerb. He saw us at a club one night and said afterwards, “cut the smut” and “you’ll get nowhere for at least five years”. That was at least twenty years ago. We have always had a healthy attitude to work. We have never been overly ambitious, have always been grateful that we can earn a living this way and been glad, largely, when success has called for our peers.

We are in the King Dome Pleasance Theatre at 8.30 pm. 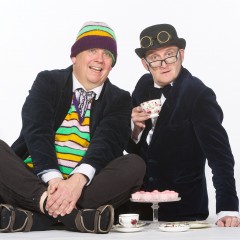 Interview with The Raymond and Mr Timpkins Revue

The Raymond and Mr Timpkins Revue speak to Voice about Edinburgh Fringe, their show, and offer advice on the industry