Samson Hawkins takes some time to talk to Voice about the show, inspirations, and to give advice to young people.

I'm Samson Hawkins a theatre maker who lives in a canal boat in Southall, West London.

It splices punk puppetry, Alt Ballet, and theatre for people who don't like theatre to tell the story of a drug addicted ballerina.

The fringe is the home of risk taking theatre. You know when you see a production and you just think, this is an Edinburgh show, that's what Swan Bake is. We have put it on a few times before but I have always wanted to take it to Edinburgh and finally we have made it.

No other festival really takes over a city. I love theatre, and you just have so much opportunity to see amazing work. Some people find it overwhelming but I feel really at home in Edinburgh during August, I think it should always be like this, the residents of Edinburgh might disagree though.

My first Edinburgh was 7 years ago, so I haven't really been around long enough to notice massive differences. One thing that has changes is the cost of accommodation, it's sky rocketed. I also think the bigger theatres and companies take more work. And the big 4 seem to have more of a strong hold on the festival which, I'm not a fan of.

I couldn't read or write till I was about 11, I didn't really see the point in it. But my mum sent me to youth theatre, which forced me to learn because I had to know what to say. And I really wanted to, I wanted to be a kid with a splurge gun handing about with flapper girls. So, it was a fun thing I did as a kid, then I saw Earth Quakes in London at the nation Theatre when I was about 14 and that changed things for me. It showed me what live performance can do to an audience. (sic)

I'd probably be a fencing contractor working for my dad. Or a cattle farmer with my granddad. I'm a country boy, so something on the land. Actually, I think I'd be useless and they would fire me.

To be honest I'd be a footballer, who wouldn't? But, I'd have to be a lot better at football. If I played in the premiership now everyone would just keep having a go at me for missing the ball when I try to kick it. I'd like to be a professional 3rd choice goalkeeper that never plays. That's the dream.

I watched a pantomime of Doctor Doolittle with my mum and nan, I remember being amazed how they first of all found a 2-headed llama and secondly trained it to be in a play. I have since discovered that it was probably a bloke in a costume, which is a shame.

I changed a snapchat reference to an Instagram Story reference the other day. I feel sorry for the people doing shows about Brexit or Donald Trump, they must have to re-write their script every day.

The first play I ever did had complaints because it was blasphemous. I would never make anything deliberately to offend someone, but on the same note, I wouldn't ever take anything out because it was offensive. I'll go by my standard of right or wrong and hope people understand that it's nice to disagree.

GOD WHY WONT IT STOP!

Julius Caesar knew how to put on a show. I like the sound of navel battles in a colosseum. We could do a sick version of the tempest with real ship wreck.

Personally, for theatre, I don't like the free fringe. I think it devalues the hard work that goes into a project. So, for Swan Bake, which is a small production, we had lots of people put hours of hard work. A writer, a director, a producer, a set and puppet maker, a lighting designer, a sound designer, 3 actors, a dramaturge, a stage manager, the bands who made our play list and then you have all the people working at the venues. I don't think it's right for an audience member to see something and not pay for it.

David Mamet says that an audience must choose to be there and they must pay, I agree.

@swan_bake is your best best for Swan Bake based banter. www.secondsonstheatre.co.uk for our proper website with proper information

Swan Bake is performing at C Royale at 14:40 on 2nd – 28th August. For tickets and more information visit the Ed Fringe website. 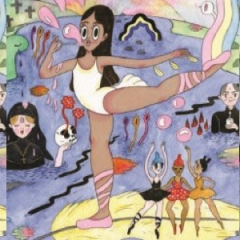 Samson Hawkins takes some time to talk to Voice about the show, inspirations, and to give advice to young people.