Spencer Jones takes some time to talk to Voice about the show, inspirations, and to give advice to young people.

Hello. My name is Spencer Jones. Or should I say The Herbert? I'm still working it out.

How would you describe your show?
Like throwing a hedgehog at a dart board. I've made a hedgehog out of stupidness, props, looping music, audience participation, tennis balls and paper mache. I have then disguised that hedgehog as a play which I constantly disregard and break out of.

Why do you want to perform at Edinburgh Festival Fringe?
Money and fun. I make a bit of money and I have a lot of fun. I don't have any real friends now outside comedy as I never get to go out as I am always working in the evening or having a rest watching re runs of Bullseye. As a result, all my friends are now doing comedy so I get to hang out with them for a few weeks and talk shop.

Do you think the Fringe has changed over the years? If so, how? Are these changes positive or negative?
I've only been going a few years. The only thing that's changed is hopefully I've got a little bit better at making people have a good time.

What first motivated you to enter the industry? Who were your inspirations?
I've been circling around being a professional dickhead for a while. Flirting constantly with other professions but they always made me bored. This industry is the least boring job I can think of. Apart from being an undercover copper, but I reckon I've missed the boat on that one.

If you didn't have your current job, what would you probably be doing?
Trying to get this to be my job. I'd do any job that gave me evenings and weekends. Or I'd be watching Bullseye tooting on a crack pipe. Or I'd be a farmer, with a small holding. I fancy having a polly tunnel, a really long one, proper hot, with butterflies in it. They would all land on me because I would cover myself in honey and I would be dressed as a flower. Hang on, I'd better write that down, that could be next years show.

If you could have any job in the world, what would it be?
I'd like to work in a posh fridge factory. My current fridge really is a piece of shit. It's the worst fridge in Plumstead. I imagine I would get a hefty discount.

What is your earliest childhood art memory?
My brother repeatedly smashing his head against a glass panel. Oh, hang on, you said art memory. Erm... actually I am sticking with my first answer.

Do you ever feel any pressure to be a social commentator, or constantly update material to respond to events?
Nope. There are a lot of amazing comedians doing that already and doing a much better job than I could ever do of it.

Equally, do you think there has been a shift in public sentiment that has affected your work?
That's not for me to say. My rules are very simple. Make them laugh. The public sentiment is very difficult to gage when you are dressed as a robot, shouting like a dictator desperate for a poo.

Describe the last year in 5 words or less?
Hard work but worth it.

If you could work with anybody, from any point in history, who would you pick and why?
I would to do something with Sleaford Mods. They are funny, exciting, naughty and the same age as me.

What advice would you give to someone who wants to take a show up to the fringe?
Do loads of previews. Do loads of open mic and new comedy nights. Never stop trying new stupidness. Take the smallest cheapest room in a flat share with as many people as possible. Flyer like a demon. Treat your audience like you are meeting a relative you haven't seen for ages at a wedding where nobody knows you and that night you have to sleep in your car.

When and where can people see your show?
6.20 pm Monkey Barrel.

Spencer Jones: The Audition is performing at Monkey Barrel at 18:20 until the 27th August. For tickets and more information visit the Ed Fringe website. 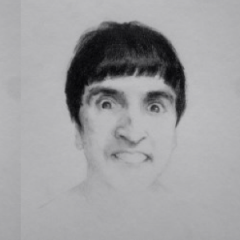 Spencer Jones takes some time to talk to Voice about the show, inspirations, and to give advice to young people.