Lizzy Skrzypiec takes some time to talk to Voice about the show, inspirations, and to give advice to young people.

Dearest reader, my name is Lizzy Skrzypiec, director and improviser with troupe Degrees of Error in our show Murder, She Didn't Write.

Murder, She Didn't Write is an improvised comedy show where we make up an entire murder mystery on-the-spot based on audience suggestions. The audience then have to guess whodunnit and help catch the killer. It's like a game of Cluedo meets Whose Line Is It Anyway meets an Agatha Christie novel. Hold on to your deer stalkers!

We adore the Edinburgh Fringe (it's our fifth year) and our show is an experimental and unusual take on a classic genre. We feel at home performing there each year in such a beautiful city. It'd be a crime to miss it.

Aside from the fact it's the biggest comedy festival in the world and an absolute juggernaut of talent and absurdity, it has a wonderful vibe. The Fringe brings a whole new life to the city. It's a very friendly festival too.

Edinburgh Fringe changed most noticeably about five years ago when a series of unusual murders took place almost daily. It's a real mystery and has nothing to do with the fact it times perfectly with our show's arrival at the festival.

We were inspired by other amazing shows who seemed to be making a killing in the improv world: Showstoppers!, Austentatious, Parallelogramophonograph. Most of us have been performing improv for a long time and it's time for us to be making some killings of our own.

Why, I'd probably be a health and safety officer, I have a good eye for hazards and dangers in the workplace.

The widow of a wealthy billionaire. That can be a full-time job and I'm definitely a mourning person.

I remember doing a rather spectacular finger painting of the Little Mermaid. I didn't draw her lover Eric though, best not to leave any finger Prince.

As a period improvised comedy, we can't comment overtly, but allusions can often be made. We take suggestions from the audience at the start, and some are often very topical, but we always use them in an unexpected way. We may do a referendum, for example, but it won't be the one you expect!

Only in such that both improv and crime drama have surged in popularity.

I reckon Angela Lansbury would love to be in the show. Can someone get her on the line?

Murder, She Didn't Write is performing at Pleasance Courtyard at 17:00 on 2nd – 28th August. For tickets and more information visit the Ed Fringe website. 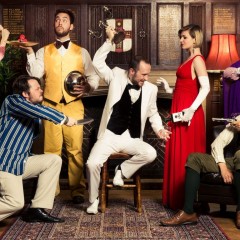 Lizzy Skrzypiec takes some time to talk to Voice about the show, inspirations, and to give advice to young people.