Read an interview with the people behind Funny Women Fest, who talk about their show, and its importance in tackling misogyny.

Funny Women was set up by Lynne Parker in 2002 as a dedicated platform to encourage women to perform and write comedy. The organisation runs the Funny Women Awards which has been the launch pad for some incredibly successful female comics like Katherine Ryan, Sara Pascoe, Zoe Lyons, Andi Osho, Susan Calman, Kerry Godliman and Bridget Christie.

A comedy chat show featuring the funniest females and their friends from across the Edinburgh Festival Fringe. Featuring a guest host and a different line-up every day, with comedians, writers, TV stars, producers and directors talking about what it's like to be a part of the world's greatest arts festival, politics, theatre, film and their latest projects.

It's important for Funny Women to have a presence at the Fest and showcase the amazing talent we encounter through our Awards each year. This year we're running the competition in the autumn so we plan to build awareness for the heats which will be taking place in London, Dublin, Manchester, Exeter and more locations to be announced.

It is the only dedicated arts festival that we attend and this is the first time we've produced a run of shows since 2013. It is great to see how many women successfully debut their shows across the Fringe and go on to do well with their careers.

Despite the fact that we are still, 15 years on, answering the same old boring question about whether women are funny or not, we can now answer it with a shoulder shrug rather than spending time bothering to reply! There have always been a huge number of women launching their careers at the Fringe – now they are getting the recognition they deserve, but maybe not all the awards?

Lynne Parker, the founder of Funny Women, was motivated by a comment from a mysoginist comedy promoter who told her that he never booked any women because 'they aren't funny' and that there are 'no funny women'. 15 years on and she's more than proved him wrong! Lynne was working as a publicist for this promoter and came up with the idea of Funny Women as a knee jerk reaction to his sexist reply. Lynne has personally seen over 3,000 new female acts taking part in the Funny Women Awards since they launched in 2003 and there are more women than ever performing, writing, producing and directing comedy.

Lynne previous had a career in public relations and marketing which she finally quit in 2008 to run Funny Women full time. She says she's probably worse off financially but it's great to be following your passion and promoting something you've created and developed yourself.

'Putting on shows in my garage with all the neighbourhood kids!' - Lynne.

'Yes, very much so. As somebody who has been a catalyst for change in respect of encouraging more women into comedy, I welcome the pressure and write for some national newspapers, HuffPost and, of course, www.funnywomen.com our own fabulous website!' - Lynne.

Yes, we get more and more work for companies and organisations who want to improve and develop their diversity in the workplace. As we have built up the profile of the Funny Women brand in comedy, our corporate clients are very comfortable bringing us in to work across the gender divide with diverse teams, men as well as women, to improve communications, build teams, develop confidence and create more balance in the workplace. We run a whole range of activities from workshops to full scale Fringe inspired comedy shows.

Lucille Ball – writer, producer, performer, promoter… she had it all. Plus she was incredibly glamorous and very much her own woman.

We have done both as Funny Women and it really depends on what suits you. If money isn't the driver then the free fringe model is an amazing place to get your work seen and the low entry rate means that you can cover your costs if you are jiggly with the buckets and promote your show well.

For paid shows it's good to take advantage of all the promotions and offers so get people in to your show but there is always a risk. We've lost our shirts before and it's a very humbling and demoralizing experience, especially as we are not benefitting directly and we run shows to support new talent.

Either way there is a risk and you have to weigh up the cost versus the value of participating in such an important arts festival.

Think about whether or not you need to do the whole run of three weeks. The venues have really opened up their spaces for short runs and shows earlier in the day so there are lots of options. Make sure people know you are there – in the printed programmes, on the Ed Fringe website/app, and getting your own printed flyers and posters out on the streets. Social media plays an increasingly important role in getting you exposure and it's easy to do it yourself. Don't sit in your damp cave expecting people to find you… they won't know you're there unless you tell them!

Funny Women Fest is performing at The Gilded Balloon at 12:00 on 2nd - 28th August. For tickets and more information visit the Ed Fringe website. 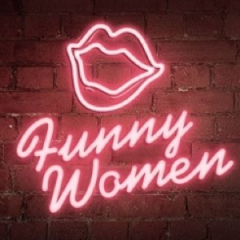 Read an interview with the people behind Funny Women Fest, who talk about their show, and its importance in tackling misogyny.