Joshua Bond takes some time to talk to Voice about the Djuki Mala, inspirations, and to give advice to young people.

I'm Joshua Bond one of the Djuki Mala Family and Director of the show.

How would you describe your show?
Direct from Elcho Island, Djuki Mala (Djuki meaning 'Chooky' with a Yolngu accent and Mala meaning 'mob') perform a high-energy and stunning fusion of traditional Indigenous culture, contemporary dance and storytelling. Since their 2007 clip of 'Zorba the Greek' went viral, they've thrilled audiences with reinterpretations of popular culture and traditional dances in a way that juxtaposes contemporary Yolngu culture.

The show tells the genesis of Djuki Mala, formerly known as The Chooky Dancers, and is interspersed with multimedia and gives audiences the opportunity to experience some of the more intimate moments and turning points that have shaped them, in a show that is a marvel of timing comedy and clowning, with a hefty dose of heart and soul.

We are excited to perform in Edinburgh because it's Edinburgh Fringe! So much to love - the creativity, the driving passion and appreciation for the arts, it's such a beautiful time of year to be surrounded by such beautiful people in a beautiful city. And the bars are open till 5am... (not always a great thing!)

It's also one of the best arts markets in world, a great place for your work to be seen. The Edinburgh audiences are brilliant.

The sheer size of it, the volume if international visitors there specifically to engage in different forms of art. Also, the quality of the audiences. Scots, We love 'em!

Yes but its all positive, the Variety of shows, and spaces drawing in bigger shows whilst being open to the smaller shows with the ever growing free fringe, also the variety that you know see with the circus hub and other venues constantly opening up new spaces.

I don't necessarily remember becoming interested in it, I just remember feeling like it was an extension to my way of living and communicating that then developed into a realisation that it was also a way of effecting change by making people feel…

Absolutely, I think being a performer, director, writer, acrobat, singer any of it, is a privilege and one that gives agency. To have what is essentially a grand soap box - whether it be in a black box, a spiegeltent or a proscenium arch - where one can address the many.

With the state of the world, there is certainly no lack of topics worth commenting on, unfortunately however most of the people that would benefit from that agency are not also afforded the privilege of that "soap box". So yeah, I believe that that privilege comes with a responsibility. Not to say there isn't a place for entertainment for entertainments sake. The words of Nina Simone always come to mind when she said, "It's an artist's duty to reflect the times in which we live", and I think it's true, just as true now as it ever where, if not more so.

A little bit I suppose, for example we are now seeing an increase in Aboriginal Theatre, TV, Film music more generally. So, there is definitely an increased appetite for First nation Australian Stories.

Describe the last year in 5 words or less

Something like that, but in less words, cray cray..!

Probably my kids when they're older, because they are the most creative/crazy and fun people I know.

I'm still learning about the free fringe but at a guess, this is a little bit to do with the fact that given the opportunity people will sometimes pay you more by their own free will than they would when asked to pay a certain amount. I like it, but obviously there are many uncertainties that go along with that.

I would suggest train for the Fringe like you would a marathon.

Assembly George Square Theatre - The Theatre, For the entire duration of the Festival at 4:30pm except Mondays.

Djuki Mala is performing at Assembly George Square Theatre at 16:30 on 3rd – 28th (not 14th, 21st). For tickets and more information visit the Ed Fringe website. 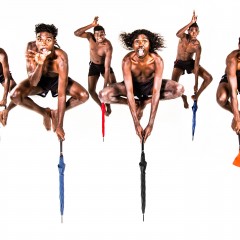 Joshua Bond takes some time to talk to Voice about the Djuki Mala, inspirations, and to give advice to young people.