Sofie Hagen takes some time to talk to Voice about the show, inspirations, and to give advice to young people.

OH, HELLO READER. I don't know why I'm yelling. I assume you are far away from me when you read this. I am a 28-year old Danish stand-up comedian currently living in London, doing shows that are both too dark and too personal all at once.

It's a show about the death of my grandfather. Only, he's not dead yet. So, if I had to pick an adjective, I'd say 'dark'. I talk about emotional abuse, resistance and resilience. And I try to make some jokes as well.

This sounds corny, but from the first breath I took at the Edinburgh Fringe, I knew I was going to have to spend every single August there. In Denmark, I was starved for comedy. One comedy club, four open mics… I craved comedy.

In Edinburgh, it's everywhere and all the time. It's my idea of heaven. So do to a show there and be part of it… It's magnificent.

Edinburgh can and will break you. I remember my first year. I just sat down on some steps and started crying. A comedian saw me cry and sat down next to me to comfort me, but then started crying himself. We never spoke, we just cried next to each other. Then we both had to go and do our shows.

This is hard to say, because I've only done two shows before. I've *heard* that it has changed a lot, but I can't really comment on that.

I used to love Ellen DeGeneres, but really, I loved every single stand-up comedian I discovered. It was mostly Danish comedy I saw in the beginning and it just fascinated me to bits. I was never really motivated to start - I was forced.

The comics got together and decided that I had to start doing comedy, because otherwise I'd just be hanging around the clubs annoying everyone with questions about how it felt to be on a stage. Then one thing led to another...

I was studying to become an international social worker when I really fell into comedy. I was working for the Danish Refugee Council and Red Cross Youth Denmark. My whole life was about fundraising and charity organisations. I'd like to think I would have stayed there, as I sometimes miss it.

Oh. I already have that. I am so lucky to be able to say that I have my dream job. I would not want it any other way.

My mum had gotten this big bucket of green paint from a coworker. She placed me in the kitchen with some white paper and a brush. So I was painting green figures all over the paper when I suddenly thought: Hold on. This feels unfair. Why is it only the paper that gets to be green? So I started painting the chair and a bit of the wall.

I ended up taking off all my clothes and painting my body green. There is a photo of me with a big grin on my face, completely green. My mum was not happy.

No. I do comment on society quite a lot but I never feel pressured to. I want to do it and I feel the need to do it.

Yes. The world is falling apart. There has a rise of the right-wing and it is scary. It means that I have had to do more activism. I have started two separate political movements, one in Denmark and one in the UK.

I spend a lot of time campaigning and speaking about politics. It means that I feel like comedy has been pushed away a bit - which it hasn't actually, but it's a fear. I miss just doing dick jokes without worrying about the world ending.

I can only speak for myself - I chose the free fringe for two years because I am poor. It didn't cost me much. I managed to make money. I liked that it felt inclusive - that everyone could come and see it, even if they had no money.

This year I have a ticketed show. I make all of my shows anxiety-safe, meaning that people can contact me ahead of time if they need a specific seat or similar. The last couple of years, people have had to queue, sometimes for hours, to get into my show.

That would make me anxious as fuck if that was me. And I did my shows in nightclubs. Huge rooms. This year I get a nice little 90 seater theatre. It will be much more pleasant.

Go up as a punter first. Check out all the rooms and time slots, both free and ticketed. And take a deep breath. 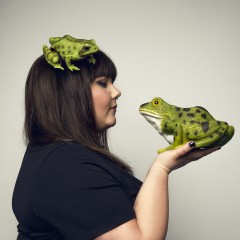 Sofie Hagen takes some time to talk to Voice about the show, inspirations, and to give advice to young people.