Voice MagInterviewsInterview with The N…

The Noise Next Door takes some time to talk to Voice about the show, inspirations, and to give advice to young people.

We are The Noise Next Door.

Both of our shows are pretence free, high energy and anarchic hours of pure entertainment. The afternoon show is a fun for everyone romp through an epic fantasy themed world, and the late show is similar. But with more swearing and less theming.

It's our 10th consecutive year, so not completing the decade would play havoc with our OCD.

The length. And the rain.

It's definitely changed, no question. 8 shows in its first year to well over 3000 last year! In recent times, the addition of the Free Fringe has helped out performers who can't (or won't) pay the sometimes exorbitant amount of money to play at the bigger venues, and in turn this means that audiences aren't as priced out. In terms of general atmosphere, it's still as vibrant as ever.

In honesty, the idea that we didn't have to settle into a 9-5 desk job was just too glorious to turn down. We formed our little company and knew our product was strong, and at first we didn't really know what industry we were entering into. We carved our niche and found our voice as we went along. Our inspirations are hugely varied, from the original 'Whose Line Is It Anyway?' to South Park, from Jim Carrey to Tommy Cooper and everything in between.

Three of us would be probably be teachers. The other one would be a hilariously successful director of commercials, which his mother reminds him of. Daily.

Painting with potatoes. Which we would now consider just a waste of good chips.

With the very nature of our improvised shows, audience suggestions often echo the major events that dominate social consciousness. It's less of a pressure and more of a necessity to commentate on these issues. We have to retain an up to date knowledge of everything that goes on, from politics to reality TV!

The country is currently very politically charged. More so than at any other time in our career and this can certainly alter suggestion taking.

Jesus. His magic would really help with the improv. And having him on board is just a really good sell.

The upfront costs of a putting on a ticketed event can be crippling, particularly if your show isn't successful. On the other hand, if you can front the cash and your show is successful, you can reap the rewards. It's like life - you need to have money to make money. In terms of how it affects audiences, in our experience, it doesn't necessarily are much difference. If you have a quality show, people will come.

Know exactly what you're taking up. Understand the content and quality of your product. Be selective with your marketing. Buy a sturdy rain mac and some good shows. Don't burn out.

You can see our afternoon show, The Really Really Good Afternoon Show (With Swords), in The Debating Hall at the Gilded Balloon at 3pm, and our late show, '10', in Pleasance Two at the Pleasance Courtyard at 1050pm.

The Noise Next Door's Really Really Good Afternoon Show is performing at The Gilded Balloon at 15:00 on 2nd - 27th (not 16th). For tickets and more information visit the Ed Fringe website. 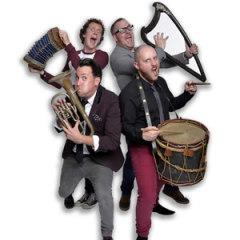 Interview with The Noise Next Door

The Noise Next Door takes some time to talk to Voice about the show, inspirations, and to give advice to young people.